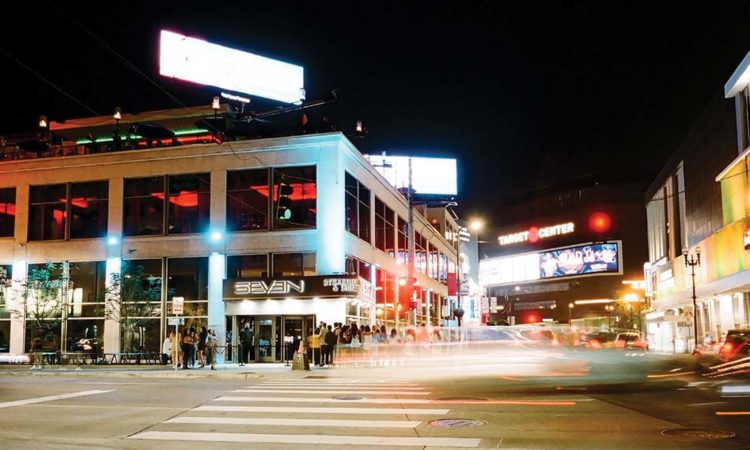 The nightclub is the latest casualty of a moribund downtown.
By Adam Platt
February 01, 2022

Seven, the steakhouse and nightclub anchoring the corner of 7th and Hennepin, suspended operations on January 31, citing insufficient business. “It’s simply untenable to operate a nightlife business in our part of downtown this time of year,” said managing partner Ken Sherman in an interview with TCB.

Last summer TCB profiled Seven, which has historically catered to a predominantly Black clientele, and employed an innovative and unusual security protocol to maintain customer safety in an increasingly violent city.

Sherman said the business had a good December, when downtown was more activated in advance of the holidays and the weather was milder, but the cold and Omicron-driven mitigations imposed by the city and employers have emptied downtown out. He also noted a growing number of his staff said they felt unsafe coming to work in a deserted Warehouse District combined with a continued absence of police on the streets.

At the time of its closure, Seven was only operating three or four nights a week. The business laid off roughly 120 employees, almost entirely people of color, many with difficult back stories. Sherman says he hopes to welcome them back as soon as business can be restored.

Though not specifically blaming Mayor Frey’s vaccine and mask mandates, Sherman says the city’s Covid interventions make it difficult for a nightclub to operate when competitors across suburban borders have none. “Why would you come here when you can go to Richfield and party without hassles?”

Sherman says he hopes to reopen in spring, but it’s entirely contingent on the reactivation of downtown.