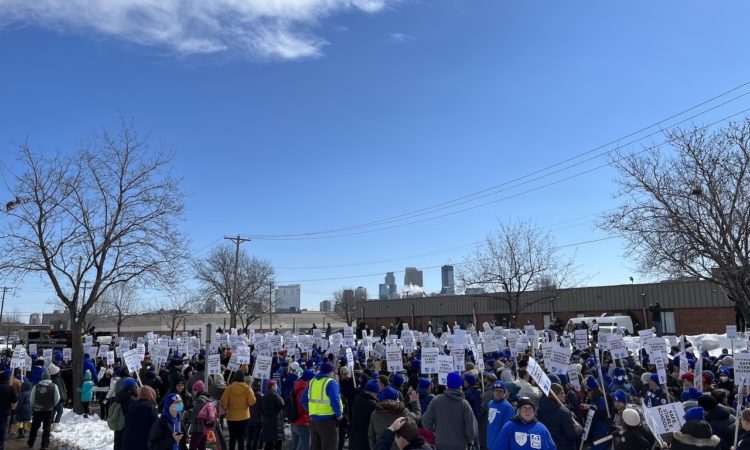 What stake does business have in the fate of urban public schools?
By Adam Platt
March 27, 2022

It had to happen, of course. There was no way we were going to get out of the Minneapolis Public Schools (MPS) without a strike. It’s been 20 years for us as an MPS family. We’ve had good years and bad years, good teachers and not-so-good ones, good principals and others who were in way over their heads. But we never had a strike.

It lasted three weeks, and a contract was ratified Sunday evening, so classes will resume Tuesday, March 29. Details are sketchy, but it appears MPS will need to cut jobs and programs to fund wage increases, a catch-22 that tells you much about the state of public ed.

I’ve been aware for most of my 20 years in MPS that it was a deeply dysfunctional institution, where high turnover and ineffectual superintendents were a feature, not a bug, and with a widely variable and undisciplined teacher corps, a politicized school board, and a teacher’s union that was the real power behind the throne. During our two decades at MPS, the district has bled enrollment, lurched from financial crisis to financial crisis, and is currently in the throes of a necessary freak-out over its inability to teach kids of color.

My friends and neighbors are grateful they are past it or were never a part of it. But here’s the thing: We’re all a part of it. When our public schools can’t educate a growing subset of the population, we face two big problems: a shrinking future workforce and a gradually destabilizing society as people’s capacity to earn a living weakens. The loss of old-line industrial and manufacturing jobs to Asia and Mexico has destroyed the pipeline between the public schools and the workforce.

People who know better than I do say MPS is trending toward bankruptcy and would have been there long ago if not for endless tax referenda, federal Covid bailouts, and other forms of one-off largesse, and that the state is terrified to have to clean up the mess because it has no solutions either.

Schools aren’t businesses, but they cry out for an outcomes-driven mentality that business understands but government doesn’t.

Every student who abandons MPS (the rate is accelerating) takes funding with them, exacerbating deficits, while the union counters with more demands. A thriving system will lift all boats, but a dying one can’t sustain anything.

Part of how Minneapolis schools have devolved to this point is the benign neglect of the larger community. The Star Tribune covers MPS like a marginally relevant suburban district. It’s been the stepchild of priorities for over a decade.

Until the larger community reengages with this institution, it will continue to languish. And to be clear, there are no simple answers. If any large urban school district has figured out how to educate and motivate urban youth, I am unaware of it. It’s just that the disparities are so much worse in Minnesota.

I long questioned public schools’ capacity to overcome poverty and homelessness, but my mind has been changed by a relative who is an assistant principal in the Chicago Public Schools. She feels schools can work miracles with kids with major disadvantages, but she suggests public schools are not currently up to the task. She believes large urban administrations create endless bureaucratic roadblocks to good teaching, but also that too many teachers, even teachers of color, unconsciously write off kids rather than figuring out how to reach them.

What I’ve taken from our conversations is that we need a Marshall Plan to train teachers with specific skills and design schools around those needs. We need to pay and train teachers better, and we need to expect more from them. We need to neuter the control their unions have over school governance, because teachers want to protect their own interests, like any workforce. Schools aren’t businesses, but they cry out for an outcomes-driven mentality that business understands but government doesn’t.

Most importantly, we need more of us who don’t have kids in large urban districts to become invested in them. To support candidates who want more funding and higher standards. Who will vote to professionalize politicized school boards. Who will loudly say “unacceptable” when the current MPS administration, through its actions, says it lacks the capacity to educate poor kids of color and middle-class white kids at the same time.

Neither liberals nor conservatives have the moral high ground in this conversation, because both indulge perspectives that codify failure.  Pragmaticism, not ideology, should guide school reform. The business community needs to be paying attention and, when needed, get involved.