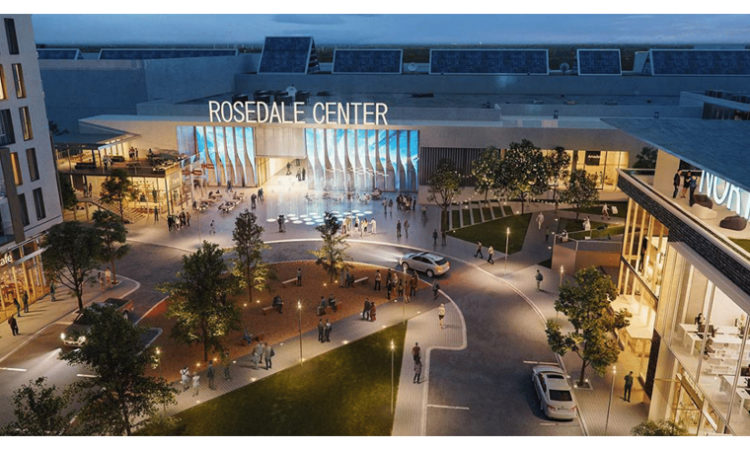 On the heels of a $76 million renovation and the opening of a two-story aquarium, Rosedale Center bucks the retail doomsday trend and eyes a project to introduce housing, a grocery store, and more.
By Amanda Ostuni
September 30, 2019

Countless flashy headlines over the last few years lament the “death of malls.” But if those are to be believed, then Minnesota’s Rosedale Center is a defiant outlier.

The Center on Monday announced plans for a significant expansion project, which will include new housing, a hotel, a grocery store, fitness centers, new restaurants, co-working space, a medical office building, and more retail space. Lisa Crain, JLL Rosedale senior general manager, told TCB it’s not yet clear what the added square footage will be, but said it’s expected to cost more than $100 million. It will be privately financed.

“Rosedale is obviously very successful, we’re a regional destination, [and we were] looking at different ways to enhance and grow the center,” said Crain. “We thought this would be a great opportunity to really look at what trends we’re starting to see in our industry and how to keep Rosedale moving forward for the next 50 to 100 years.”

The expansion is the biggest project for the mall in at least two decades, said Crain. It comes as the Center celebrates its 50th anniversary.

In a press release, Roseville city officials credited the mall’s endurance and success to its adaptability. Crain agrees, noting that the center “has continued to grow, evolve, and change” over time.

“We’ve been able to invent more retail that I think is very successful—and really it’s the experience we’re trying to get after, so that when you come to the center, there are so many different things to do,” said Crain. “We’re really making it a comprehensive area where you can do everything—live, work, play, eat.”

What’s also helped Rosedale’s success is its location, TCB reported in 2017. The mall sits right near the intersection of Interstate-35 and Highways 280 and 36, and it’s the only major mall in the northern suburbs.

The mall hasn’t been immune to challenges in the retail industry. Earlier this year, the Revolution Food Hall that opened just last fall was killed in July. It will be reopened as a food hall with a slightly different model, particularly with a focus on local vendors, mall officials said at the time. Additionally, one of Rosedale’s staple department stores, Herberger’s, closed down last year.

But Rosedale has persisted. From 2016 to 2018, the Center underwent a $76 million renovation project, which included a two-level parking ramp and the second Von Maur location in the Twin Cities. Early this spring, the mall added a pop-up market called Six for Good.

Even more significant, Rosedale just welcomed an aquarium to its turf. The two-story, 23,000-square-foot SeaQuest opened in May.

Rosedale’s latest expansion project will unfold in phases, according to the press release. Mall leadership is currently pursuing business partners, and Rosedale’s management firm JLL will soon submit formal plans to the city of Rosedale to begin the permitting process.

Roseville City Manager Pat Trudgeon expects the project to bring new jobs to the community and continue a growth trend for the city as a whole.

“Rosedale is a regional destination that not only brings millions of people to our community, it also enhances the quality of life here through the stores, restaurants, and retail it offers,” said Julie Wearn, CEO of Roseville Visitors Association, in a statement. “This investing with a vision for an even stronger future.”

Rosedale expects construction for the expansion to begin next year, and Crain said it will take about three or four years to complete.