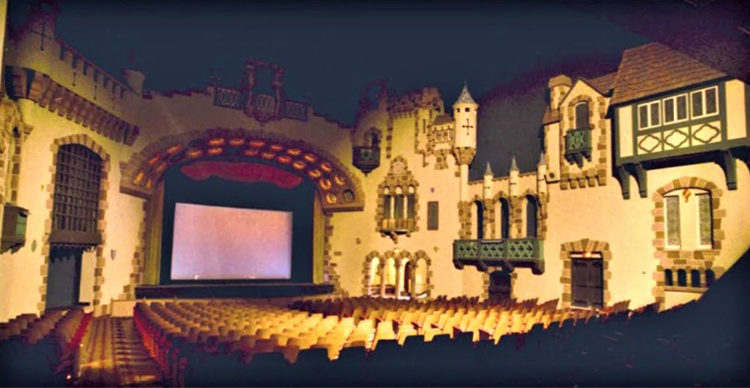 The interior of the Chateau Theater in Rochester. ( Photo by DMC Corp.)

Restoration of the historic Chateau Theater in Rochester’s “Heart of the City” district is a key element of Mayo Clinic’s Destination Medical Center plan to establish the city as a cultural as well as a medical hub. Mayo and DMC leaders say amenities such as a fully-functioning theater for live performances are essential for Rochester’s ambitions to become a world-class medical draw.

And now, with recent approvals by the city and the Destination Medical Center board, work on setting the Chateau up for interim uses is about to get underway — and it could be ready for small-scale events by the end of this year.

The Chateau is a well-known former Vaudeville and movie theater constructed in the late 1920s and notable for its castle-like dÃ©cor, built-in balconies and towers, and night-sky ceiling. But it has been vacant since 2015 after being used for some years as a bookstore and coffee shop by Barnes and Noble.

The city bought it that year for $6 million — a sum that included a $500,000 contribution from Mayo Clinic — but has yet to adopt an official long-range re-use policy for the historic venue. Initial cost estimates for its complete restoration have come in at around $23 million.

But in the meantime, city officials last week approved a proposal by the DMC’s board allocating up to $1 million in state-supplied capital improvement funds to stabilize the building and set it up for small-scale interim uses while its permanent plan is still being hashed out.

“This solution will allow activation of the Chateau in the short-term, while long-term planning among public and private partners to create a true destination in Heart of the City continues,” DMC Economic Development Agency executive director Lisa Clarke said in a statement.

According to DMC documents submitted to the city, the expected tab for allowing interim uses will be around $887,000. For that sum, the Chateau could be improved enough to host “assemblies” of up to 390 people.

The work will include preserving the building’s roof and windows; removing stairs and an escalator not in compliance with its future plans; and bringing the building up to code for several types of “assembly events,” such as standing-room space for music performances and “tabled” events in which meals are served.

The DMC planners last week also laid out possible options to pay for the hefty $23 million tab for completely restoring the Chateau.

In assessing how it might be done, they looked at a comparable historic theater restoration project elsewhere in Minnesota: Duluth’s Norshor Theater. That $31 million effort included turning the city-owned venue over to a private developer after issuing a request-for-proposals. Private ownership, in turn, made the Norshor eligible for federal historic renovation and “new market” tax credits.

That approach, however, also necessitated a $7 million request for state bonding authority, which required two legislative sessions to eventually corral.

The DMC planners recommended moving ahead with an RFP process seeking a private development partner for the Chateau. Meanwhile, they also noted that Minneapolis-based developer Ryan Companies has agreed to consider incorporating the Chateau into its plans to redevelop a next-door office building it recently purchased from Wells Fargo.