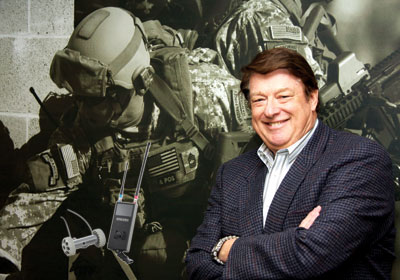 Robots That Serve and Protect

Edina-based ReconRobotics is bringing to reality the science fiction staple of a robotic helper for military and law enforcement. But we’re not talking RoboCop. The company’s chief product is the Recon Scout XT Throwbot, a lightweight robot with articulated arms and multiple visual sensors, routed by multi-toggled operator control units. These are robots you throw.

“What we’re seeing is where robots aren’t much different from a soldier’s weapon or his night-vision goggles,” says Alan Bignall, president and CEO of ReconRobotics. “We’re moving robots from being big pieces of machinery that are owned by a bigger group that require specialists to use, to personal pieces of gear you can use to protect yourself and your team.”

The Scout XT weighs about one pound. It offers foot soldiers and SWAT teams a reconnaissance device that can be thrown up to 120 feet. As it moves through an area, the Scout transmits real-time video showing the layout of rooms, the presence of enemies and civilians, and other valuable information. Shortly after its introduction, more than 250 police agencies and federal law enforcement entities began using the robots.

The company’s robots are constructed from dozens of parts, many of which are supplied by fabrication shops throughout Minnesota; those parts are assembled into finished robots by Winona-based manufacturer RiverStar. ReconRobotics says that more than 2,200 of its robots are currently deployed. The company markets its products through an international distribution network to clients including the U.S. Army, Navy, and Marine Corps, as well as several federal agencies: the U.S. Marshals, Border Patrol, FBI, and the Bureau of Alcohol, Tobacco, Firearms, and Explosives.

ReconRobotics was spun off in 2006 from a research project at the University of Minnesota’s Distributed Robotics Laboratory. The project’s mission was to develop micro-robot technology under funding from the Defense Advanced Research Projects Agency and the National Science Foundation.

“I’d never been in manufacturing or robotics, and I’m not an engineer,” says Bignall, who joined the company in mid-2006 after serving as president and CEO of Visual Interactions, a Minnesota company that produced business-oriented tech products. “I’m able to look at good ideas, and I know how to make money and position the idea in the market.”

While law enforcement agencies represent a crucial client base, the U.S. military also began equipping five-man fire teams with ReconRobotics’ Throwbots. In August, the U.S. Army ordered 385 XT kits for troops in Afghanistan, a $5.8 million contract that was followed in October with a $4.8 million order of 315 more robots. ReconRobotics says that it’s on track to sell more than 1,000 robots in 2012, garnering a projected 100 increase in revenue along the way.

“The drive is saving lives,” Bignall says. “Why risk my life by sticking my head around a corner when I can throw in a relatively cheap piece of equipment and see whether there are people, trip wires, or IEDs?” (IEDs are improvised explosive devices—homemade bombs typically placed along roads.)

One of the company’s local customers is the City of Plymouth, which obtained a Scout Throwbot in 2009. According to Investigative Sergeant Chris Kuklok, the city has found it to be a “very important tool in tactical search scenarios.” These include situations where “subjects are hiding in a house and might be armed.” In such potentially dangerous situations, the Scout “gives us a bit of an advantage.”

Bignall foresees big things not just for his company but for the region’s robotics industry. ReconRobotics recently organized and underwrote Minnesota Robotics Alley, a public-private partnership with the Minnesota High Tech Association that aims to bring together investors, researchers, manufacturers, and political leaders to drive Upper Midwest job growth in robotics.