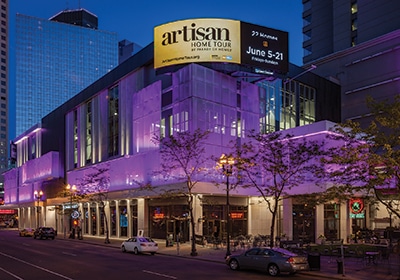 Fretting about the fate of Block E is a decades-old pastime in downtown Minneapolis. Now rechristened Mayo Clinic Square, the block is in better shape than it has been for years and is nearly 100 percent leased. One hole remains: the former Hard Rock CafÃ© space at the corner of Seventh Street and First Avenue.

The previous all-retail concept was an abysmal failure. Now the skyway level is entirely given over to office space, a new twist for the block. “We spent over $50 million developing the property into a Class A location,” says Jaffe.

Other new tenants include HDR Architecture Inc., which leased about 9,000 square feet, and City Works, a street-level bar and restaurant, which has about 10,000 square feet on the southeast corner. Surviving tenants from the building’s previous life include Jimmy John’s, Starbucks and Kieran’s Irish Pub.

Kieran’s sued Jaffe back in 2014, charging that disruptions during the renovation were hurting the pub’s business. “We reached a friendly settlement a while ago,” says Jaffe. “We even extended their lease. It’s all good.” He says that the 550-space underground parking ramp has always performed well due to its location.

The reconfigured spaces drew tenants who were seeking something different. “It’s not a cookie-cutter, ribbon-glass 50-story tower. . . . It’s a unique offering of nontraditional office space,” says Brent Robertson, part of the leasing team and a managing director with the local office of Chicago-based JLL. “This building is a bridge between the business district and the entertainment district.”

An earlier plan pitched by Jaffe’s group for a downtown casino at the site rolled snake eyes. Jaffe has no regrets: “I’m very happy the way it turned out, and it turned out the way it should have turned out.”