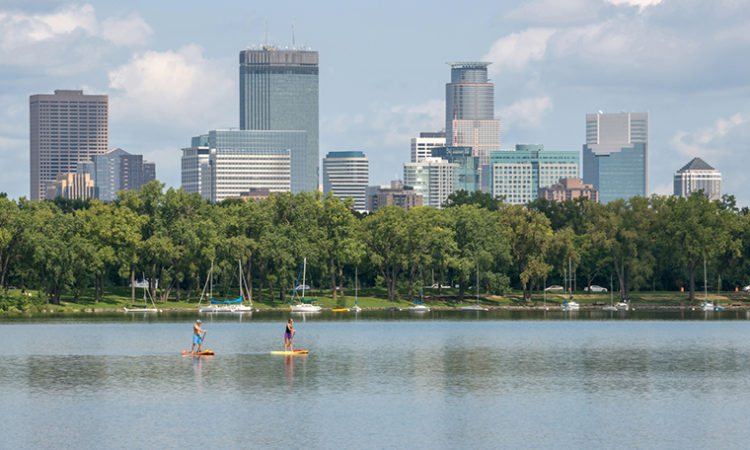 The bottom line for many businesses in the tourism industry is more about survival than profit. And it may be like that for some time.

The bottom line for many businesses in the tourism industry is more about survival than profit. And it may be like that for some time.
By Kait Ecker
May 09, 2020

Fishing opener in Minnesota is like a national holiday for many— a bustling weekend filled with community festivities and dozens of boats on the water. Albert Lea, which hosted Gov. Tim Walz last year to open the season, did so with a myriad of activities like dinner, dancing, an art exhibition, and a reading of locally curated “biggest fish” stories. But this year, the governor cancelled his scheduled visit to Otter Tail County this weekend. Fishing will be allowed, but there won’t be crowds. Travel is discouraged. Anglers are being asked to stick to a lake close to home.

Typically this weekend in May is not only the fishing opener, but a tourism opener. It signals the start of the busy season for restaurants, hotels, and storefronts that survived winter. Instead, with the stay-at-home order strongly encouraging people to stay within their own communities, the critical spring season is starting out with stacking lost revenue for Minnesota’s $16 billion hospitality and tourism industry.

The week of April 19-25 saw a hotel occupancy rate of just 4.4 percent for Minneapolis. By comparison, capacity for the same period last year stood at 69.9 percent. In the summer months, more than 80 percent occupancy is typical, but industry insiders expect it to be way off this year.

While fishing and boating is allowed under eased restrictions, the Minnesota Department of Natural Resources reminds people of the need to still obey all the other rules. The stay-at-home order strongly discourages long-distance driving, the DNR stressed.

“This is not the time to travel long distances to fish, since travel can spread the Covid-19 virus, particularly to rural communities that may have more virus-vulnerable populations,” the DNR said in a written statement. “Many of our favorite fishing spots are in and near these communities, which are home to older populations or American Indians who have a higher incidence of underlying health conditions.”

The problem isn’t visitors using the boat ramp or their own cabins, it’s the risk of contagion from patroning the local gas stations and grocery stores.

“One transmission can have serious impacts on a small town,” the DNR said in its statement.

But many of these businesses are struggling to stay alive without these visitors’ dollars, according to Nort Johnson, president and CEO of the Faribault Area Chamber of Commerce and Tourism.

“Many of our iconic local businesses are supported and propped up by the visitor industry. And then we have that amenity to enjoy locally,” he said. “And if you take that source of revenue out of your local businesses, even as the ability to move around opens back up, what they have already lost in the hesitancy of travelers could be the final nail in those coffins. And we’ll miss those locally as well as travelers.”

But there’s a divide in resort communities, Johnson said. Some want to get the tourism industry rolling, and others are worried about getting infected.

“There’s not one answer around that. I’m typically a fan of people exercising their freedoms,” he said. “And in circumstances that we have now, I think that there’s absolutely still a way to exercise those freedoms and do it safely with the right cautionary tactics in place.”

The DNR has issued guidelines on how to experience the outdoors in a safe manner.

At a press conference this week, Liz Rammer, president and CEO of Hospitality Minnesota, said that hospitality businesses are ready to open now.

“We need to get this right to bring these businesses back to full health, and we’re confident that we can do that, beginning immediately,” she said. “300,000 jobs in Minnesota depend on us getting it right, and they hang in the balance.”

“These businesses are who we are as Minnesotans, and they’re the fabric of our communities throughout our state,” Rammer said. “Our businesses and the public, they’re ready to approach this new normal.”

Even with the ability to operate or partially operate, the business that’s coming isn’t enough, said Ben Wogsland, director of government relations for Hospitality Minnesota.

“They’re not making money doing that, they’re just losing less money currently,” he said. “The bills continue to be due. You’ve got your rent, or maybe you’ve got your mortgage, you have vendor payments, insurance payments, you’ve got tax payments. And all those things are coming due. So it’s a real challenge, and it’s a very difficult time for those folks.”

Restaurants offering to-go and delivery are maybe at 20 percent of normal revenue, Wogsland said, with occupancy for hotels hovering around 10 percent.

“For a lot of these businesses, they make almost all––if not all––of their revenue during the 100 days of summer. And lodging properties and hotels …looking forward to that springtime bounce in business,” Wogsland said.

But that surge in business didn’t come this year, because of the pandemic.

“It’s really critical that we begin to get some of that revenue coming in, but obviously that we balance it with safety,” Wogsland said. “In the hospitality businesses, the guest and the customer and their safety always comes first.” 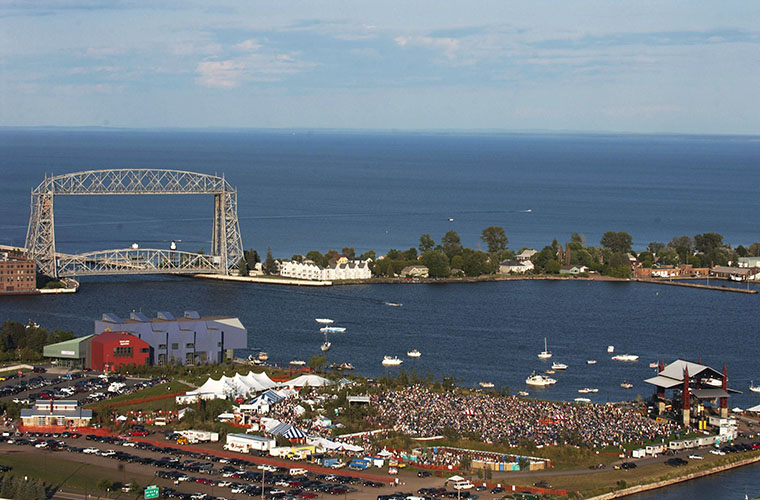 But even as some government restrictions ease and people look towards Gov. Walz turning up his metaphorical dials more, it will take traveler confidence to help the tourism industry bounce back.

The first segment that will return to travel is the drive market, said John Edman, director of Explore Minnesota. Air travel will take a significantly longer time to recover.

“It’s going to be a while before consumers feel entirely comfortable about venturing out. Some are going to want to venture out,” he said. “They’re not going to explore in the same way that they have in the past.”

Since the middle of March, industry surveys by Explore Minnesota show increasing levels of losses; 34 percent are at a complete standstill; 36 percent reported business cut in half or more.

Typically, about half of Minnesota’s tourism traffic comes from outside the state. Even as travel restrictions lift, Edman thinks more people will be staying closer to home.

“[Minnesotans] are not going to be going as far and will be discovering the things that they have right here,” he said. “And that’s going to really help provide a foundation for our industry to start to get back on track.”

Beyond leisure travel, Edman thinks business travel is going to be more challenged going forward. Technology has proven to businesses that in-person meetings might not be as imperative as they once believed.

The tourism industry is working on marketing efforts to build up that consumer confidence, but it will take time. Estimates vary greatly as to when travelers will feel safe again, ranging anywhere from a few months to over a year.

Business trips account for a significant portion of state visitors. Normally things like conventions, concerts, meetings, and a whole host of events keep hotels at a decent capacity rate. But for the week of April 19-25, Minneapolis saw a hotel occupancy rate of 4.4 percent with the capacity being 69.9 percent filled during the same time last year.

The summer months are normally the highest occupancy, said Melvin Tennant, the president and CEO of Meet Minneapolis. The city’s hotels see an average occupancy rate of 81.1 percent of its nearly 10,000 rooms through June, July, and August. There is expected to be a steep decline in those numbers this year. Right now, 69 percent of Minneapolis’ hotels are open, the rest are temporarily closed. The Minneapolis Convention Center is not hosting events through May 18, due to the stay-at-home order.

“We will have very limited activity through June and July, as most events have moved to either later this year, or to a future year,” Tennant said. “When events do come back, they will have to comply with CDC and state regulations.”

Meet Minneapolis is working on rebooking—rather than cancelling— as many events as possible.

“We have spent a lot of time in terms of developing recovery plans for different segments of the industry via business travel, convention, and leisure. So we’re looking forward to rolling those plans out at the appropriate time,” Tennant said.

“We’ve been fortunate to be able to rearrange a lot of things and to reschedule rather than cancel. That’s everybody’s preferences,” he said.

The Saint Paul RiverCentre has its calendar cleared essentially through the end of June, he said.

In Duluth, April is the city’s busiest convention month, so the pandemic has hit revenue dramatically, not only for the Duluth Entertainment Convention Center, but also for other lodging and venues who get business associated with those events, said Anna Tanski, president and CEO of Visit Duluth. Notably, Grandma’s Marathon, typically held at the end of June, was cancelled.

“The impact was dramatic and immediate,” she said.

In terms of group business alone, Duluth has lost more than $4 million in revenue, Tanski said. That doesn’t even account for individual travelers and leisure.

In a survey by Visit Duluth, nearly 40 percent of respondents said they would be comfortable traveling to Duluth within one to two months once the stay-at-home order is lifted. More than 20 percent said they would travel immediately.

“There’s a pent up demand,” Tanski said. “People want to begin to return to those types of experiences that we all treasure so much.”

The survey also showed that cleaning standards and protocols and decreasing the number of Covid-19 cases in Minnesota would be highly important to visitors in considering travel to Duluth.

In the meantime, businesses are working on reopening plans and enacting the necessary cleaning procedures. Visit Duluth is planning to issue suggested strategies in anticipation of the phased reopening of the state.

“We’re starting to see small signs of hope, where some employees are being called back,” Tanski said. “It’s definitely a trickle right now, but we do anticipate that we will see how resilient this industry really is, once the stay-at-home order is lifted.”

The consensus is that while spreadsheets, occupancy, and revenues may eventually return to some semblance of what they were pre-pandemic, things will look different.

“Everyone pretty much agrees now that we can’t be back to anything normal, and I don’t even know what normal is,” Mattson, with Visit Saint Paul, said. “It won’t go back to the way it was in terms of business and revenues until the health issue is addressed, either with a remedy, a way to respond to coronavirus, or the vaccine.”

And while outdoor activities allow for very natural ways to socially distance, indoor spaces may be operating at limited capacity. For example, a ballroom that may typically hold up to 1500 people, may only be able to do 255, Mattson said.

“I know that the world will probably be a much cleaner, germ-free place in the future because of what we’re going through with coronavirus,” he said. “At the end of the day this is all part of a means to an end, and that’s creating demand that drives economic impact for our community. And that’s why we do what we do.”