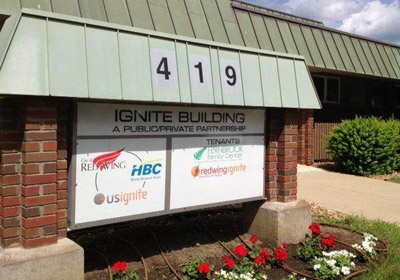 The southeastern Minnesota community is launching a business incubator as part of a larger initiative to bolster entrepreneurship and attract new businesses.
August 18, 2013

You might associate Red Wing with the iconic shoe company that shares the city’s name, or perhaps with its idyllic views of the Mississippi River.

But there’s a concerted effort afoot to transform the historic Minnesota town into an innovation hotbed.

Roughly a year ago, a national initiative called U.S. Ignite identified 25 U.S. communities with stellar broadbrand infrastructure—which the group said could be leveraged to bolster innovation and entrepreneurship. Red Wing, a town of roughly 16,500, was nominated for the program by Hiawatha Broadband Communications and was the smallest city to be selected, according to Randy Olson, executive director of the Red Wing Port Authority, the city’s economic development agency.

Community leaders in turn launched a local initiative called Red Wing Ignite, aligning the effort with the national organization’s larger goals and setting out to launch a business incubator in an attempt to foster entrepreneurship in Red Wing and attract new businesses.

Olson, who serves on the board of Red Wing Ignite, scouted Minneapolis’ “co-working” spaces, including CoCo and Joule, to help develop a model for building a business accelerator.

Red Wing Ignite then tapped city funding to revamp the former Red Wing Shoe headquarters. The renovated 10,000-square-foot space includes a “state-of-the-art video conference center,” more than a dozen leasable offices, and a large common area that can be used by “co-working” members who pay a monthly fee.

While Red Wing Ignite received support from the city as well as corporate and foundation partners, Olson said the organization hopes to be “cash flow positive” within four years, drawing revenue primarily from the business accelerator’s membership fees. (Co-working memberships start at $50 per month; private offices run about $350 a month.)

When visiting Minneapolis’ co-working spaces, “We spent a lot of time asking the right questions about how to become self-sustaining,” Olson said.

The business incubator kicks off with an open house on August 13, and Governor Mark Dayton plans to attend the event, Olson said.

Although the space has yet to open, about four leases have been signed for individual offices, and about six co-working members have signed on. “We're getting some traction,” he said.

The accelerator will also serve as home to a number of Red Wing Ignite events; for example, it plans next year to host a “hack event,” in which software developers and programmers will collaborate to create applications.

Olson said that, from the outset, one goal for the Red Wing Ignite Initiative has been providing a source of equity capital to early-stage technology businesses interested in expanding in or relocating to Red Wing. Work is underway to develop an angel fund to attract such financing, he said.

In addition to developing the business accelerator, Red Wing Ignite aims to build what Olson called a “test bed community”—one that provides pilot programs for existing technologies. For example, the organization is testing a “public safety application” for McGill University in Montreal, Olson said.

Red Wing Ignite “could potentially give a new identity to Red Wing,” Olson said. While the city is known for its rich history, “hopefully 20 years from now [it’s identity] will also have a technology component.”

Red Wing is not alone in its efforts to promote innovation and strengthen its local economy. In recent months, Twin Cities Business has published in-depth special reports on successful outstate communities. To learn about why the southwestern Minnesota city of Mankato is booming, click here. For a detailed look at the contributors to Duluth's growing economy, click here.