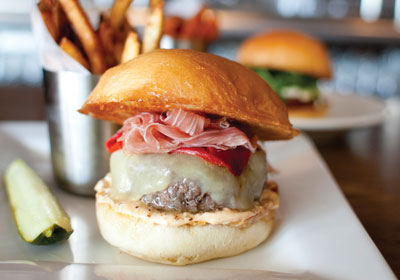 A local restaurant vet stakes his rep on creating a growth vehicle.
By Adam Platt
August 06, 2013

Although a lot of folks view burgers as the ubiquitous devil spawn of a restaurant world preoccupied with red meat, the Twin Cities has produced few praiseworthy burger restaurants in the two decades that artisanal burgers have been so in vogue nationally.

Parasole’s Burger Jones came the closest, serving a truly excellent custom-grind burger, but not much else it offers is distinguished, and after opening two restaurants, the concept seems to have little in the way of legs. Into the breach steps Red Cow, the brainchild of Luke Shimp, a former partner in the Blue Plate Restaurant group (The Lowry, Edina Grill, et al).

Shimp plans to create several Red Cows in the Twin Cities and then expand to other markets. He’s a systems and operations guy, and I don’t doubt his prowess, but it’d be nice if Red Cow had more cravable food and a more distinctive vibe before he starts building his empire.

Red Cow’s core burger is a mid-size patty served on a potato-flour bun. It’s competent, but not as distinctive a grind as nearby Burger Jones’ nor as well-seasoned. The potato-flour bun is leagues better than BJ’s, but in general the bread-to-meat ratio on most of Red Cow’s burgers was out of whack (too much bun).

Signature burgers come in lamb, elk, bison, salmon, chicken, and pork varieties in addition to beef. It’s a very large menu, and that’s not even factoring in the wide selection of craft beers and wines by the glass.

I found a lot of the fare to be only competent, but would call attention to standouts of pork belly sliders, a textbook patty melt (hard to find locally), great homemade Buffalo wings, and what could be the best sweet potato fries in town. Not much else I tried was worth writing home about, and it may be that Red Cow’s menu is just too elaborate to do much well.

Service is friendly, but on repeated visits servers made mistakes placing our order and could not explain how certain dishes were prepared. Red Cow’s ambience is pleasant, but there’s not much sense of place here, certainly not compared with the Blue Plate restaurants.

Luke Shrimp surely has the systems to build a successful national restaurant company, but Red Cow in its early stages tells me he doesn’t have the soul part down just yet.

What doesn’t
Mistake-prone service, bland design, and a general lack of personality.