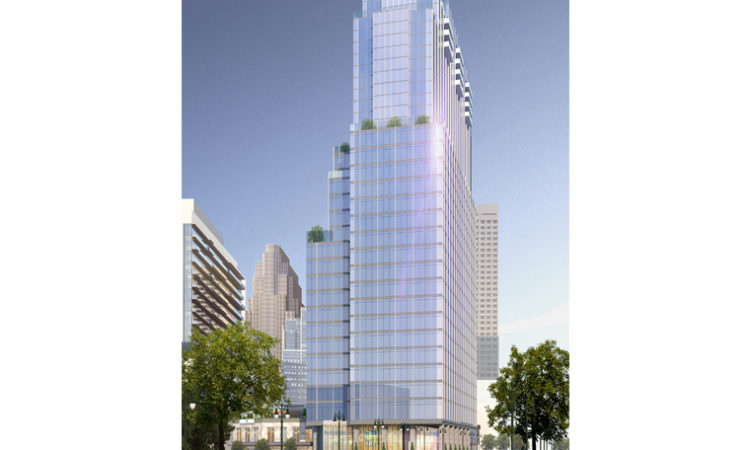 It’s been a long road to redevelopment at the Nicollet Hotel Block in downtown Minneapolis.

United Properties’ 33-story tower will include Class A office space, a Four Seasons Hotel with about 275 rooms, 18 luxury condos and street-level retail space. The development cost is estimated at $330 million. Precise numbers for square footage and room/unit counts have yet to be finalized.

United Properties has already spent more than three years trying to put together a viable redevelopment deal on the site. It beat out three other developers who responded to a request for proposals issued by the city in October 2014. The city awarded exclusive negotiating rights to United Properties in April 2015. City documents at the time outlined an original plan for approximately 300 apartment units with a 182-room hotel.

But plans for office space supplanted proposed apartments after United Properties responded to an RFP from RBC for office space in February 2017. RBC currently occupies 300,000 square feet of space at the RBC Plaza building, about three blocks south of the Gateway project site. RBC has 1,500 employees in Minneapolis.

“With the new building, RBC WM-U.S. will have several new branding opportunities, including naming rights for the building,” said Michael Armstrong, CEO of RBC Wealth Management-U.S. in a statement. “Our office space will be more open, brighter and better designed for how we work. The new headquarters will be a building our colleagues will be proud to call home and will allow us the flexibility to grow.”

The 1.7-acre site at the north end of the Nicollet Mall is bounded by 3rd Street South, Hennepin Avenue, Washington Avenue and Nicollet Avenue. City planners still call it the Nicollet Hotel Block even though the 18-story hotel was razed in 1991.

United Properties paid the city $300,000 for extensions to its redevelopment rights to the site. But it was facing a March 31 deadline to execute a redevelopment contract with the city. Without a contract in place, the city had the right to terminate the deal.

“We were requiring evidence of a lease,” said Emily Stern, a senior project coordinator for the city’s Community Planning and Economic Development (CPED) agency. “RBC as the anchor tenant was the linchpin for the project.”

The Minneapolis City Council approved a revised development agreement in mid-March. United Properties extension payments to the city will be deducted from the agreed-upon $10.4 million purchase price. The current closing deadline is December 31, Stern said.

The “Gateway” name is a nod to the surrounding neighborhood, which was once known as the Gateway District. But the official name of the project is likely to change. United Properties expects to start construction in the spring of 2019. The project will be completed in 2021 which will be 30 years after the demolition of the Nicollet Hotel.