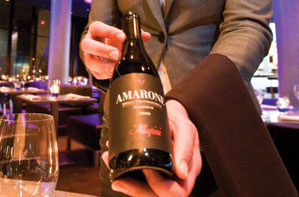 Amarone is one of the winemaking world’s most wonderful contradictions.

An Italian wine made of dried grapes from the Valpolicella production zone—mostly Corvino with smaller percentages of Rondinella and Molinara—it is somehow both raisiny and dry, fruity and cigar-like, full and heavy on the tongue yet balanced. This is every single thing any hearty red drinker wants in a wine.

Here in the Twin Cities, only a few restaurants cellar Amarone regularly. (And this is a wine rarely, if ever, sold by the glass.) You can, however, visit Cue at the Guthrie Theater, where certified sommelier Jessica Nielsen keeps a stock of half-bottles of Allegrini Amarone 2000 for a mere $79 per.

This is 375 milliliters—roughly two and a half glasses—of pure velvet. The Allegrini has a more savory taste than some, with a nearly meaty, earthen fore flavor and a two-minute finish full of chocolate, brandy, and dark fruit. I tried this with a pork shank braised in port and cherries. An exquisite combination, but the wine clearly led the pair.

If you hope to sample this wine, act soon. Within a few months, Cue will have changed its name, concept, and management, being taken over by restaurateur Tim McKee (La Belle Vie, Barrio, Solera) and his partner in the deal, Dallas-based Culinaire. They’ll make the restaurant over with a sustainable-seafood menu and a name yet to be decided. Also to be decided: whether they’ll buy Cue’s extensive wine holdings.

So, one more to try now in case it disappears: a dessert wine from grapes that didn’t make the Amarone cut (see sidebar below), a Tommaso Bussola Recioto 2003. Bussola is one of the great Amarone producers, and likely eliminates grapes that others would use for a first press. In any case, its Recioto is that rare drink that is sweet but not cloying. It has the mouth feel of Madeira, puddling on the tongue. The flavor is pure ruby and honey and brown sugar, with a hint of nutmeg. This bottle, too, goes for about $80, but at 500 milliliters—six to eight after-dinner drink glasses—it’s a steal.