Companies say train shipments might have to grind to a halt without an extension, but some argue that railroads are behind due to misguided priorities.
October 22, 2015 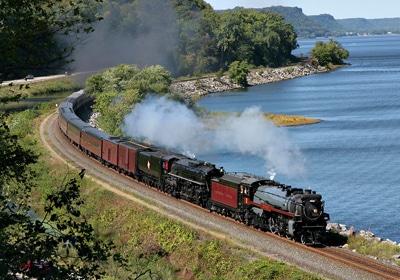 National rail freight and passenger companies are hitting the panic button. Eight years into a federal deadline to install new safety equipment on its rail lines, railroad companies are telling Congress they need three more years to wrap up the project.

If no extension is given beyond the end of year due date, railroad companies say a rail transportation shutdown could occur, with nearly all Minnesota industries feeling the pain.

The Star Tribune reported of on the issue that’s causing concerns both inside and outside the industry.

Minnesota’s highest officials are split on the issue. Gov. Mark Dayton was stern in a recent email, writing: “I think the railroads should be required to meet the deadline, and stop threatening us for having to do so.” But Sens. Amy Klobuchar and Al Franken seemed much more willing to provide the railroads leeway: Both supported the Railroad Safety and Positive Train Control Extension Act, which was introduced last March and extends the deadline until the end of 2020. Franken expressed a need to “keep pressuring railway companies to make railroads safer,” while Klobuchar largely agreed. In a statement, she cited the number of recent train derailments as a priority for improving the rail lines’ safety measures.

The issue revolves around safety mechanisms being installed by railroad companies called positive train control (PTC), which legislation requires of trains carrying passengers and hazardous materials. The system uses GPS navigation to monitor train separation and speed so that collisions are better avoided and fuel efficiency is improved.

Given the state’s massive use of railroads, everything from Minnesota’s agriculture to tourism would be affected. According to MnDOT’s Statewide Rail Plan for 2015, its most recent figures from 2012 indicate about $226 billion worth of freight was shipped by rail – a quarter of the $912 billion moved throughout Minnesota’s entire transportation system.

MnDOT expects that number will increase greatly. By 2040, it forecasts freight carried will nearly double, jumping from one billion tons to 1.8 billion tons — a 44 percent increase from 2012. In turn, that $912 billion freight value is estimated to increase 161 percent to $2.3 trillion by 2040. If the percentage of freight shipped by rail remains constant (which MnDOT expects it will), then railways have the potential to handle $575 billion of the state’s goods within the next 15 years.

In our May 2015 issue, TCB detailed the nearly half a billion invested this year to address capacity issues in Minnesota. Meanwhile, rail expansion plans were announced in Duluth as well.

With the amount of money dedicated toward various growth areas versus the PTC installment deadline, some are saying the railroad companies need to refocus. Bruce Glover, a Minnesota-based vice president of the Brotherhood of Maintenance of Way Employees Division, told the Star Tribune that it showed a lack of concern regarding safety.

“I don’t think it was a priority [for the railroad companies],” he said. “It sort of says out loud that safety is not No. 1 like they say it is.”