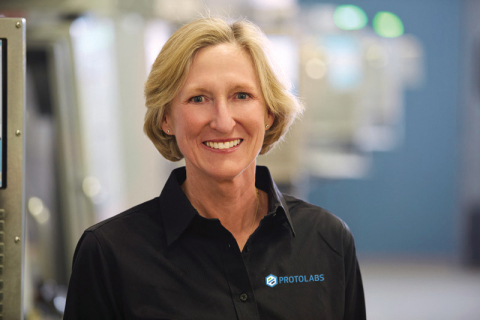 As part of a “carefully planned succession process,” Holt will be replaced by Robert Bodor, who’s been serving as Protolabs’ VP and general manager of the Americas.
By TCB Staff
December 14, 2020

In a news release issued Monday, the company said Robert Bodor will take the reins of the organization starting March 1, 2021. Holt, who’s steered the company for the past seven years, will stay on board as CEO until then. She’ll also continue to serve on the company’s board.

Protolabs chairman Archie Black said Holt’s seven-year tenure at the organization was marked by “remarkable growth and expansion.” Per Black, Protolabs’ revenue jumped by more than 165 percent under Holt’s leadership.

“[Holt] continuously improved all aspects of the company’s operations while being a compassionate leader and developing a winning culture,” Black said in the release. “All of this helped drive exceptional revenue growth and returns for our shareholders.”

Black noted that the CEO transition follows a “carefully planned succession process.” He added that Bodor is “the right person to lead the company.” For the past six years, Bodor worked as the company’s VP and general manager of the Americas. During his time in that role, he played a key part in growing the company’s services relating to 3D printing and sheet metal fabrication, Protolabs officials said.

Protolab’s design flexibility and quick response time has been especially relevant in a pandemic. Holt believes this year will accelerate the adoption of both 3D printing and selling such services through e-commerce. Protolabs is 100 percent e-commerce, but Holt said in a conversation with TCB this summer that less than 6 percent of b2b manufacturing sales occur online. “What’s happened in the pandemic is we’re realizing how efficient, how effective it can be. I think there’s going to be more and more e-commerce done in b2b manufacturing.”

As of this summer, Protolabs had manufactured 8 million parts used in personal protective equipment (PPE).