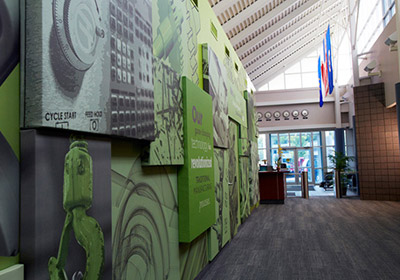 Shares of Maple Plain-based Proto Labs Inc. jumped Thursday on news that the company reported record fourth-quarter revenues and a big increase for the year.

Proto Labs, which specializes in quick-turn manufacturing of custom parts for prototyping or short-run production, said revenue rose 27 percent to $56.1 million for the fourth quarter ending December 31. Net income for the quarter also rose to $10.2 million, or 39 cents per share, up from $9.5 million for the same quarter a year ago.

CEO Vicki Holt called the quarter a “solid ending to a strong year” and the company’s stock price was equally upbeat, climbing more than 16 percent to open trading on Thursday. By mid-morning, its stock price rose $9.28 to $66.90. Before its quarterly report, shares had traded down more than 5 percent. Proto Lab's shares are still down 14 percent since the beginning of the year and 26 percent over the last 12 months.

The company navigated what analysts called a difficult quarter, given that demand for Proto Labs’ services—especially product developers that use three-dimensional computer aided design—is heavily influenced by the economic activities of the countries it serves. According to Zacks Investment Research, the fourth quarter of 2014 was marked by global uncertainties that affected many countries’ industrial activities. Still, for 2014, Proto Labs bested analysts’ expectations for three out of the four quarters, including its most recent. The company’s earnings per share came in above Zacks’ estimate of 37 cents per share and revenue beat Zacks’ estimate of $55 million. Revenue grew by double-digit percentages domestically (23 percent), in Europe (10 percent) and in Japan (25 percent) for the quarter.

Growth has been a key theme for Proto Labs since its 2012 initial public offering. It said Thursday that its 2014 revenue was driven by a 40 percent increase in the number of unique product developers and engineers it serves, including those served by its Fineline business. That number has continued to swell with each passing quarter of late. Fineline, based in Raleigh, North Carolina, became Proto Labs’ first acquisition and first foray into 3-D printing when it was acquired for $38 million last year. The company also expanded a year before, hiring 100 workers and acquiring a new manufacturing plant in Plymouth in 2013.

In a news release, Holt said Proto Labs would continue to add new product developers and engineers in 2015 as well as expand its product offerings.