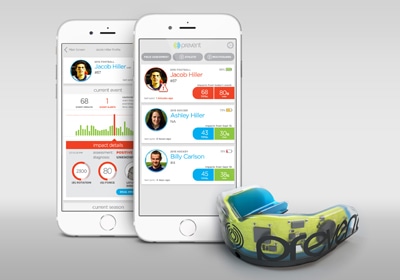 The company’s CEO said its device is the “most accurate head sensor product on the market” compared to the competition, which places sensors on the skin or inside the helmet.
September 29, 2016

Minneapolis-based Prevent Biometrics initiated a beta test last week for a product that tackles the growing concern over player safety and head trauma in heavy-hitting sports, such as football and hockey: An impact monitoring mouth guard and paired mobile app.

The tech company’s beta test is analyzing on-field use of the mouthguard by youth and high school football, lacrosse and hockey players ages 11 and older.

Prevent CEO Steve Washburn told TCB the beta test is in preparation for the product’s official launch in Boston, Chicago, Cleveland, Dallas, Denver and Minneapolis in early 2017. In 2018, the company plans to introduce the product nationwide.

“We are going to take an omnichannel approach to it,” Washburn said of Prevent’s sales strategy. “We plan to sell it directly to associations and schools, directly to consumers and also through retailers. The reason we are aiming for those six markets is to make sure the product gets integrated into those associations and schools so that they won’t have problems with something that’s so new.”

Prevent’s mouthguards gather data in real-time from collisions on the field. Through the product’s accompanying mobile app, coaches, team personnel and parents can monitor a player’s impact activity and receive alerts when a concussion event is likely to have occurred.

The mouthguards range from $199 to $299 before adding accessories, such as a wireless charger or protective case.

If the beta test proves to be effective in predicting head trauma, Washburn believes professional sports agencies like the NFL could potentially adopt the mouthguards for use across the league.

“We have contacted the NFL,” Washburn said. “I don’t think it’s unlikely that you would start to get mandates for head impact monitors in sports from the youth to the professional level sometime in the future.”

“One of the biggest problem with accuracy is secure coupling,” said Washburn. Other sensor devices are located within the helmet or function through a skin patch, he noted. “But those are not secure couplings to the skull, so you end up with a lot of inaccurate readings.”

Instead, with Prevent’s mouthguards taking measurements from the upper arch of the player’s teeth, Washburn finds his product’s degree for error is much less. “I believe our product is the most accurate head sensor product on the market,” he said.

In all, Washburn hopes the accuracy and injury monitoring capabilities of Prevent’s mouthguards will help steer family’s back to physical contact sports, especially as concussion risks have shown to be on parent’s minds now more than ever.