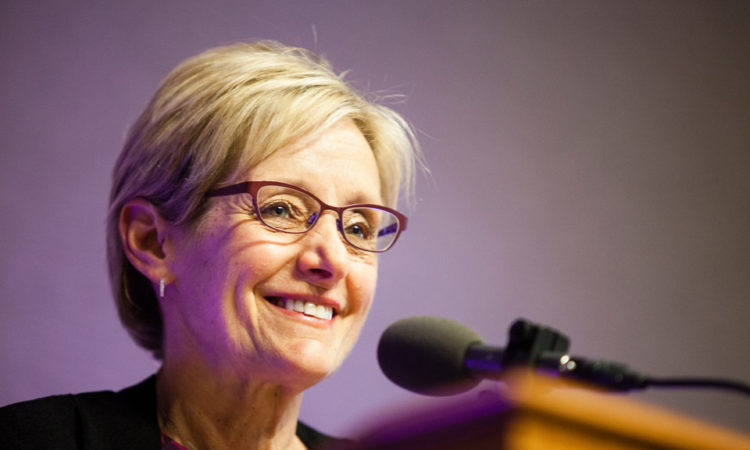 Julie Sullivan, who became the first woman and first layperson to serve as president of the University of St. Thomas in 2013, will leave Minnesota’s largest private university to become president of Santa Clara University in California.

Sullivan will be a historic figure in California as well. Founded in 1851, Santa Clara has been led by a long line of Catholic Jesuit priests. Santa Clara’s board amended its bylaws in June to remove the requirement that the university president “must be a Jesuit priest.” That opened the door for Sullivan’s candidacy.

On Tuesday, Santa Clara announced that Sullivan was the unanimous choice of the board of trustees to lead the 171-year-old university that is situated on 106 acres in the heart of Silicon Valley. “In Dr. Sullivan, we have found a proven leader and faithful servant ideally suited to lead Santa Clara University in our pursuit of a more humane, a more just, and a more sustainable world,” said Santa Clara board chair Larry Sonsini in a written announcement.

In the Twin Cities, Sullivan was lauded for her style of leadership and her accomplishments. “Julie Sullivan has been a beloved and inspirational leader, and we are grateful for her incredible contributions to St. Thomas,” said Pat Ryan, chair of the St. Thomas board of trustees, in a written statement. “She succeeded in elevating St. Thomas, building a team of strong leaders, and implementing several transformational priorities during her tenure.”

Sullivan will complete the 2021-22 academic year at St. Thomas and begin her new job at Santa Clara on July 1. St. Thomas announced Tuesday that it would conduct a national search for Sullivan’s successor. Rob Vischer, current dean of the St. Thomas School of Law, will serve as interim president beginning June 1.

A builder with big aspirations

In nearly a decade at St. Thomas, Sullivan used her leadership skills to secure financial resources to build programs, structures, and the university’s profile.

“In the last year alone, we have built tremendously: our national reputation, our diversity and our sense of belonging as a community, and our active voice and actions for social justice,” Sullivan said in mid-February during a “State of the University” address. “And in the next year and years to come, we will build both metaphorically and physically—real bricks and mortar alongside capacity and vision.”

The president who succeeds Sullivan at St. Thomas will inherit a much different institution than the one she found in 2013. Sullivan stressed the importance of moving St. Thomas into the group of the nation’s top 10 Catholic universities. Throughout her presidency, she’s taken steps to elevate St. Thomas beyond its standing as a good liberal arts school, with an abundance of business students, that primarily serves students from the Midwest.

St. Thomas has more than 10,000 students with campuses in St. Paul, Minneapolis, and Rome. In May, St. Thomas will hold a groundbreaking ceremony on its St. Paul campus for the Schoenecker Center, which will cost $110 million. The five-level building is designed to promote collaborative, interdisciplinary learning. The 130,000 square feet of space will house arts, engineering, and science programs, and it also will include St. Thomas centers for artificial intelligence, data science, and water justice as well as robotics labs and an emerging media newsroom.

Early in her presidency Sullivan thought that St. Thomas would be a good fit in Division I athletics, instead of Division III. She focused on other priorities, but after St. Thomas got booted from the MIAC conference in 2019 for being too successful, Sullivan started marshaling resources to allow St. Thomas to quickly move to Division I.

It was a huge undertaking. In the modern era, the NCAA did not allow universities to move directly from Division III to Division I. But Sullivan and her team made believers out of the NCAA on their ability to field competitive Division I teams and provide the athletic facilities required. “Without her leadership and vision, none of this would have happened,” Tom Douple, commissioner of the Summit League, told the Star Tribune in a 2020 profile on Sullivan.

“Sullivan views athletics as a key to St. Thomas’s mission of whole-person development, and she thinks that role can grow with a D-I budget and staffing. She wants the school to get more involved with supporting youth sports and create stronger bonds with the community,” the newspaper reported.

The profile focused on Sullivan’s servant leadership, and her ability to aim high and build coalitions to achieve goals. “I want to have an impact,” Sullivan told the Star Tribune. “I want to make a difference in a way that’s not just incremental.”

A key hallmark of Sullivan’s presidency was her success in serving diverse and underrepresented communities at St. Thomas.

In 2021, incoming freshmen were the most racially, geographically, and economically diverse in the history of St. Thomas.

St. Thomas opened the Dougherty Family College in 2017. It is a two-year college in which students can earn associate degrees, and many of the students previously would not have considered St. Thomas or encountered barriers to enrolling at St. Thomas. This initiative is designed to be a pathway to four-year degrees at St. Thomas.

The Morrison Family College of Health was launched at St. Thomas in 2019. In particular, the college is dedicated to serving students from diverse backgrounds. Sullivan hired MayKao Hang, a prominent Hmong leader and former CEO of the Wilder Foundation, to serve as the college’s founding dean.

In a public letter, Sullivan said, that the phrase “All for the Common Good” is “more than a marketing tagline” for St. Thomas. Her use of it, she wrote, defined the mission of St. Thomas “to advance the common good through excellence in education, work, and ethical action.”

Shortly after being named St. Thomas president in 2013, Sullivan did an interview with Twin Cities Business in which she talked about her leadership approach and values. A native of Florida, Sullivan said that her capacity for leadership began with the confidence she gained as a child.

“I had a very influential role model in my grandmother,” Sullivan said. Her grandmother owned 60 school buses and was a bus contractor. “She was a single woman and a very, very successful entrepreneur,” she said. “I spent a lot of time with my grandmother because she was lonely and I was her one granddaughter. She started telling me from the time that I was five years old that you can do anything that you want to do. And it just never occurred to me that I couldn’t.”

Sullivan went on to earn three business degrees from the University of Florida and built a successful career as a professor and education administrator.

Sullivan’s husband, children and grandchildren live in California, so her decision to lead Santa Clara University allows her to spend more time with them. “Leading St. Thomas has been an extraordinary privilege and opportunity,” Sullivan said in a prepared statement Tuesday. “Together with our accomplished and committed trustees, talented faculty and staff, and dedicated students and alumni, we continued St. Thomas’s longstanding trajectory to thrive and grow in new ways.”

Sullivan said, “The unique combination of leading an outstanding Jesuit, Catholic institution, along with the strong pull of my family, makes this an opportunity that I cannot pass up. I leave confident that the momentum we have collectively built will seamlessly continue with the strong leadership at St. Thomas.”