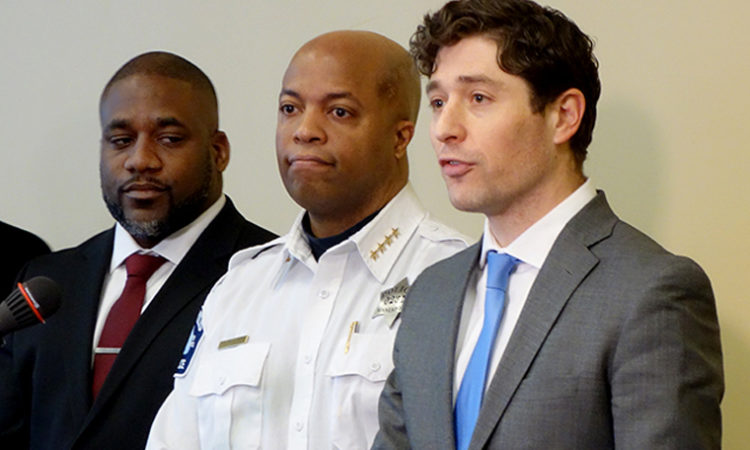 It was around this time last year when then-candidates Jacob Frey and Melvin Carter ran campaigns for mayor with this big focus: police reform. Officers should have more time to be out and about in neighborhoods, they said, to build the community’s trust after controversy after controversy involving officers last year.

But at the time, the candidates for mayor of Minneapolis and St. Paul didn’t explain specific plans for police to do so.

The vagueness appeared intentional; Frey and Carter emerged as moderate compared to rivals for mayor who pushed hard for hiring more police officers and others who said cops don’t do any good at all.

Flash forward past the November 2017 election, two swearing-in ceremonies and roughly eight months in office, and details on how exactly Frey and Carter want to change their cities’ police departments are now available, via their 2019 budget proposals.

Minneapolis Mayor Jacob Frey wants to move eight police officers currently in desk jobs to beat work next year, increasing the number of officers on streets and backfilling their office positions with civilians. St. Paul Mayor Melvin Carter, meanwhile, wants to shift money around to give all officers pay raises, among other plans. Both City Councils have the final say on the mayors’ ideas, and will decide on final budgets for the cities in December.

At the core of Frey’s and Carter’s plans: The number of 911 calls is rising with the Twin Cities’ swelling population, causing longer lag times on average for police officers to reach victims of crimes. And on top of that, the mayors want to fulfill their campaign promises of allowing officers time to build relationships with residents to win back public trust.

Frey: Mpls. can add capacity ‘in an innovative way’

Addressing a crowd in City Council chambers for his first-ever budget address last month, Frey preached the benefits of “community-oriented” policing, as he did in his mayoral campaign. But instead of proposing new hires to make up the new engagement time, he said: “We can add capacity to our department in an innovative way,” laying out the eight officer-to-civilian job switches.

The changes would cost an extra $1 million, including money for new squad cars. An exact breakdown of that total is unknown.

This push by Frey to “civilianize” some jobs at the Minneapolis Police Department (MPD)— and not add more officers — is new. He has advocated for years to grow the force, ranging from his time as a City Council member to even as recently as this year.

Minneapolis’ conversation on public safety centers on this: 911 response times have increased across all levels of crime in recent years, reaching as high as about 42 minutes for some low-priority reports, which can include cases of theft or vandalism, according to data provided by the city.  Meanwhile, fights or other violent situations may unfold for more than 10 minutes before cops show up, the data show.

That’s why some officials have argued that the city needs more cops. The force right now, they say, is stretched too thin.

Across the country, the science behind the size of law-enforcement agencies is complex and evolving. Some departments base their number of officers solely on population or the number of crimes. Others take in different factors. But the larger the city, generally the more officers per person, compared to midsized and smaller jurisdictions, according to the nonpartisan Governing magazine, which tracks police agencies’ size by city.

Also in MPD: Civilians hold roughly one-sixth of jobs, meaning sworn officers — who require about $28,000 more annually in insurance and training costs — fill all of the agency’s remaining positions, totaling 860. Over time, city officials want that number of civilians to grow to save the department money and diversify its expertise.

The mayor wants to hire the civilians in MPD’s crime labs, including an administrator and forensic scientists, as well as people who aren’t officers to keep track of technology with the department’s body-worn camera program and to work as a new “LGBT liaison.” Then, under the budget plan, officers in the existing jobs would switch to investigations and patrolling.

Responding to critics, the mayor’s office issued this emailed statement to MinnPost: “Providing officers with narrowed beats and, consequently, more opportunities to build out positive relationships with the communities our MPD serves has been central to the mayor’s plan for improving police-community relations for years.”

It continues: “The mayor’s proposed budget reflects a continued, fiscally-responsible commitment to meeting that goal while bringing in individuals specifically trained and educated in their respective fields to perform the department’s civilian work.”

The police department is on board. Police Chief Medaria Arradondo is working with the mayor on the proposal, according to MPD spokeswoman Sgt. Darcy Horn.

Beyond that, the mayor wants to invest more money in programs that target potentially violent people with intervention; get more officers working with mental health experts on crisis calls; help officers maintain their mental health; and keep the city on track with its body-camera program. A full breakdown of Frey’s proposed budget is available in a 650-page PDF online.

All in all, the mayor’s budget for spending across all city departments requires a hike to the property tax levy — or the amount of property tax the city collects —by 5.63 percent, up from a 5.5 percent increase this year. The city’s Board of Estimation and Taxation has authority to set the maximum levy and will hold a public hearing Sept. 12. 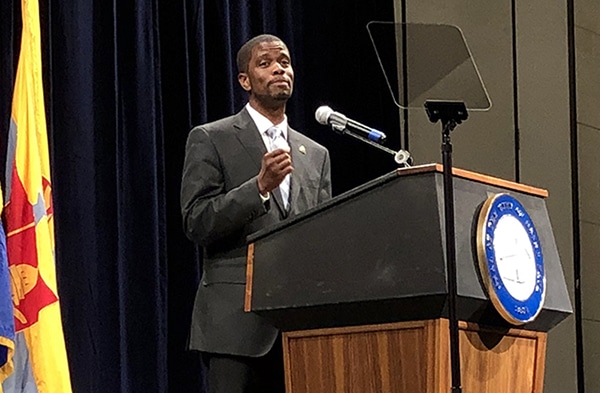 In front of a crowd at a St. Paul high school last month, Carter faced the same issues as Frey: Some residents upset by long 911 response times and an overarching distrust by some community members in police. It was his first-ever budget presentation, and he made a point of rejecting a request from numerous businesses and the city’s police chief to add 50 new police officers over the next two years.

Instead, Carter promised the city’s 626 police officers a 3.25 percent salary increase; new money for mental-health experts to work closer with police; and a new team of EMTs to handle less serious 911 calls so that paramedics are free for life-threatening ones. The city’s number of emergency calls has grown by more than a third since 2013, totaling almost 71,600 in 2017 alone, according to the mayor’s office.

There are roughly 2.06 officers for every 1,000 residents in St. Paul (population about 302,000), just slightly above the figure for Minneapolis (2.03), according to Governing magazine.

For the changes to police and beyond, Carter wants to raise the city’s property-tax levy by 11.5 percent. (Minneapolis and St. Paul have different systems of revenue flow.) A complete breakdown of Carter’s proposed budget is available online, too.

In his budget speech, Carter referenced a challenge from the public “to shift our lens on public safety” and keep up with evolving standards with “21st-century policing.”

“We’ve had a robust discussion about public safety, and about how our city’s growing population puts new strains on our police and fire departments,” he said to the welcoming audience. As in Minneapolis, the St. Paul City Council will be gathering the public’s feedback on the proposal over the next several weeks.