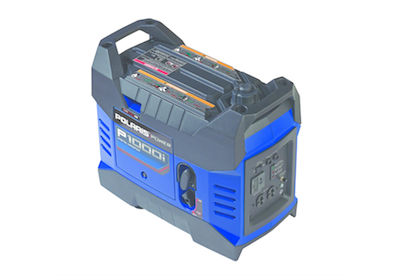 The on- and off-road vehicle manufacturer said that its new Polaris Power line is meant to complement its powersports vehicle and product offerings.
December 13, 2013

Polaris Industries, Inc., long known for its snowmobiles and ATVs, is once again expanding its product offerings—this time by adding a line of power generators for outdoor enthusiasts.

The Medina-based company—which manufactures and sells snowmobiles, off-road recreational vehicles (including ATVs and side-by-side vehicles), and on-road vehicles (including motorcycles and small electric vehicles)—said it aims to attract powersports, hunting, fishing, and camping customers with its Polaris Power line.

The new line currently consists of three inverter generators, or portable power supplies. The generators—the P1000i, the P2000i, and the P3000i—produce 1,000, 2,000, and 3,000 watts of maximum AC output, respectively. The P1000i (retailing at $649.99) and P2000i ($999.99) models are meant for smaller tasks such as providing power while tailgating, running small appliances at campsites, or powering work lights. Both can generate power for approximately 10 hours. The P3000i generator (retailing at $1,799.99) is capable of powering larger items (such as an RV air conditioner) and can generate power for approximately 21 hours.

Polaris spokeswoman Donna Beadle told Twin Cities Business that the Polaris Power line is the result of the company exploring “adjacent markets” that would support its existing product offerings.

“Generators were a perfect match to our current customers’ needs and also opens opportunities to capture new consumers that use these products,” she said.

The line was announced to Polaris dealers in October, and the generators are available this month at select stores that carry Polaris products.

Beadle said that the Polaris Power line falls under Polaris’ product, garments, and accessories (PG&A) category. The PG&A portion of Polaris’ business accounted for approximately 14 percent of the company’s 2012 sales, according to a regulatory filing with the U.S. Securities and Exchange Commission.

Beadle declined to disclose what other new products may be debuted under the Polaris Power line.

With the introduction of its new line, Polaris continues a series of recent product launches and acquisitions. Last month, the company purchased St. Paul-based military navigation software company Primordial, Inc., reportedly gaining approximately $2 million in annual revenue through the acquisition. Earlier this fall, Polaris was awarded a contract to provide ultra-light tactile vehicles to the German army. In addition to its ongoing growth in the defense industry, Polaris also re-launched the Indian motorcycle brand in August and launched a line of commercial utility vehicles earlier this year that it developed in partnership with Bobcat.

In October, Polaris reported a record-breaking third quarter, having surpassed $1 billion in quarterly revenue. CEO and Chairman Scott Wine attributed the significant growth to ongoing demand and the introduction of new products, such as the Indian re-launch and new variations of the company’s Rangers, RZRs, and Victory motorcycles.