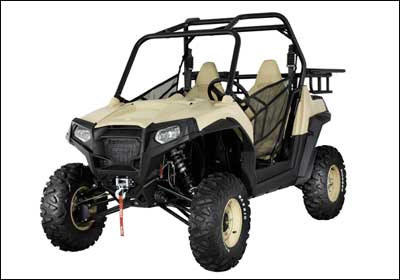 Polaris Among Those Named in a $382.5M Military Contract

Under the terms of the contract, military customers may purchase vehicles from Polaris’ defense division.
May 25, 2013

The U.S. Department of Defense recently announced a $382.5 million contract for fire and emergency vehicles, and Medina-based Polaris Industries, Inc., which is known more as a maker of snowmobiles than military equipment, is among those who can sell vehicles under the contract.

The contract is for vehicles for the Army, Navy, Air Force, Marine Corps, and federal civilian agencies, and it runs though 2018, the Defense Department said.

While Polaris is typically recognized for its powersports equipment, it has been making military versions of its all-terrain vehicles (ATV) and side-by-side vehicles for more than five years. The business currently accounts for about $50 million in annual sales, according to Knutson. That represents about 1.6 percent of the company’s 2012 revenue, which totaled $3.2 billion.

And it’s eyeing growth: “We think over time this could be a $200 million business for us,” Knutson said.

In addition to its portfolio of snowmobiles, ATVs, and military vehicles, Polaris has recently made several acquisitions in the commercial and small-vehicle markets; most recently, it acquired France-based Aixam Mega, a producer of small personal vehicles called “quadricycles” and light-duty commercial vehicles.

Polaris also produces motorcycles. In 2011, it acquired the Indian brand from British private-equity firm Stellican. And news recently surfaced that the company plans to introduce its 2014 Indian Chief motorcycle at a significantly lower price than past models.

Twin Cities Business profiled Polaris in a May feature story, examining how the company has built up its powersports business and is now becoming a global small-vehicle manufacturer. To read more, click here.