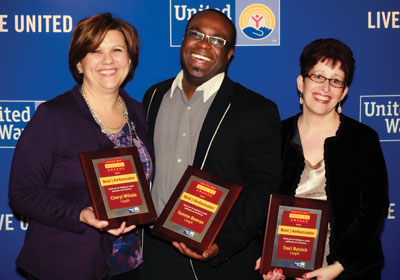 The best opportunities for networking this month.
By Anna Befort
March 01, 2012

Each year, Greater Twin Cities United Way gathers its partners to celebrate the achievements of its yearlong campaign with the Best Of Awards. The organization bestows honors in 19 categories, from “best CEO or executive involvement” to the top honor, “best in show.” “[It] celebrates how companies across the Twin Cities have made charitable giving fun and rewarding,” says D. Cameron Findlay, senior vice president, general counsel, and secretary for Medtronic. “It’s a great way to get inspired to participate and help others.” The 800-plus attendees include representatives from most of the Twin Cities’ major corporations, including a strong mix of corporate executives. The event schedule encourages mingling, with a pre-show gathering and a post-show reception with live music from Boogie Wonderland. 5:30 p.m., free, Saint Paul RiverCentre, 612-340-7416, unitedwaytwincities.org/bestofawards

Minnesota Orchestra performances are always a good place to run into local movers and shakers. And William Spell, president of Spell Capital Partners, says he’s particularly looking forward to the upcoming Springtime in Paris show, led by pops conductor Sarah Hicks. The evening will include a few special guests—guitarist Gil GutiÃ©rrez, accordion player Patrick Harison, and vocalists Robb Asklof and Kersten Rodau—to help the orchestra capture the Parisian joie de vivre in the music of Josephine Baker, Edith Piaf, Django Reinhardt, Serge Gainsbourg, and others. It may not feel like springtime in Minnesota quite yet, but the orchestra will do its best to get you in the mood. 8 p.m., $22–$60, Orchestra Hall, Minneapolis, 612-371-5656,
minnesotaorchestra.org

What are we doing right in Minnesota business? And where is there room for improvement? Those are the questions 300-plus executives and community leaders will gather to discuss at the 12th annual ChangeMakers event. Since it started in 2001, ChangeMakers has gathered a who’s-who of Minnesota leaders—Brad Anderson, Marilyn Carlson Nelson, Bob Bruininks, and Governor Mark Dayton, to name just a few—to discuss topics important to Minnesota’s innovation economy, from health care and philanthropy to business ethics and technology. This year’s breakfast will focus on business leadership, with a panel that will include HealthPartners CEO Mary Brainerd and Best Buy CEO Brian Dunn. 7:15 a.m., $75–$175, Hilton Minneapolis, 612-338-3828, collaborative.net/events

In his four-decade career, Steve Rothschild worked his way up to an executive vice president position at General Mills. But he also left that job to start the nonprofit Twin Cities RISE! in 1994. Now he’s sharing the lessons he’s learned from both worlds in The Non Nonprofit: For-Profit Thinking for Nonprofit Success. The book’s foreword is by former Medtronic CEO Bill George, who will join Rothschild for a book discussion at the Minneapolis Club. “[This is] an opportunity to connect with leaders and social entrepreneurs who share Bill and Steve’s passion for authentic leadership,” says Lars Leafblad, a principal with KeyStone Search. George and Rothschild will be on hand for a cocktail reception and book signing, followed by a joint discussion of the book. The event is open to the public, but reservations are required. 5 p.m., $25, Minneapolis Club, 612-332-2292, mplsclub.org

Park Square Theatre is on a roll lately: It set new attendance records in 2011, and it’s raised more than three-quarters of its capital campaign’s $4.2 million target. And St. Paul’s business, philanthropic, and capitol communities turn out for the theater’s opening nights. “I love the buzzy mingling atmosphere, “ says Judy McNamara, Ecolab’s vice president of tax. American Family only adds to the buzz; it’s the world premiere of a commissioned work by award-winning local playwright Carlyle Brown, inspired by the 1964 film One Potato, Two Potato, about interracial marriage. You can get extra networking opportunities during the pre-show live music in the lobby. 7:30 p.m., $38–$58, Park Square Theatre, St. Paul, 651-291-7005, parksquaretheatre.org