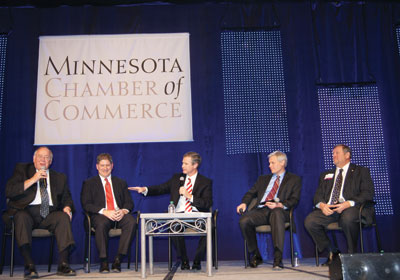 The best opportunities for networking in January 2013.
By Kara Eliason
January 01, 2013

January 9
Minnesota Chamber of Commerce’s 2013 Session Priorities Dinner
If you’re looking to rub elbows with local leaders in business and government, this is your event. More than 1,200 are expected to attend, including chamber members and business owners. The evening includes an issue briefing session, reception, dinner, and program. “My favorite part of the event is the pre-dinner networking. It’s a who’s who of business and government. [You have] direct access to the influencers in the state of Minnesota,” says Michele Engdahl, manager, government and community affairs, Thomson Reuters.

January 12
Long Day’s Journey Into Night Opening Night
This is the first time the Guthrie Theater will present the Pulitzer Prize- and Tony Award-winning drama, starring acclaimed actors Helen Carey and Peter Michael Goetz. Joe Dowling directs the story about the Tyrone family, whose bonds begin to unravel over the course of one day in a seaside Connecticut home. While the play runs through February 23, opening night is the best time to bump into business leaders and members of the arts scene. If you’re looking for VIP access, a $2,000 donation will get you into the Guthrie Circle. Members receive invitations to exclusive opening night receptions, events, and behind-the-scenes tours.

January 19
Duets: An Evening of Perfect Pairings
The Junior League of Minneapolis’ annual event features food and drink pairings from a variety of Twin Cities restaurants, such as Red Stag Supperclub. Even if you’ve attended in the past, you’ll want to check out this year’s new venue, Aria at the Jeune Lune, in Minneapolis’ Warehouse District. Event sponsors include Eminent Interior Design, J. Hilburn, and Ridgedale and Eden Prairie centers, so expect professionals from the design and retail industries, plus lots of Junior League members.

January 24
Diamond Awards
Sports stars, medical professionals, and business leaders attend this fundraiser for brain, nerve, and muscle disorder research at the University of Minnesota. The Minnesota Twins host the event at Target Field, and past attendees include Kent Hrbek and Twins President Dave St. Peter. The event features a silent auction, raffle, patient stories, and an awards presentation. And if you’re a baseball fan, you may want to snap a photo with the World Series trophies from 1987 and 1991, which will be on display in the VIP reception.

January 26
Doubt Opening Night
This world premiere production by the Minnesota Opera tells the story of Sister Aloysius, on a mission to ruin Father Flynn, whom she accuses of abusing the school’s only black student. If you’re looking for networking opportunities beyond intermission, consider joining one of the Minnesota Opera’s specialty groups. Those who donate more than $2,500 annually are welcomed into the Camerata Circle. Members can enjoy an exclusive dinner before the show and dessert reception after. For young professionals ages 21 to 39, there’s Tempo, with a $50 annual membership fee. Tempo members are invited to an opening night after-party, which attracts lawyers and corporate professionals, plus members of the opera chorus and orchestra.