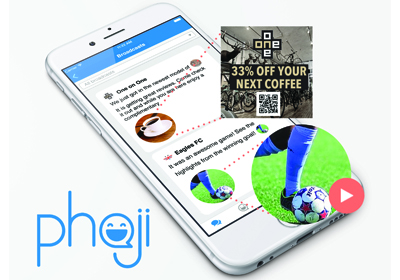 The smartphone app is on a 90-day charge to raise $2 million to $5 million to broaden its reach outside of Minnesota.
February 29, 2016

Successfully launching the next big smartphone application—especially with competition like Facebook, Twitter and Snapchat—may appear virtually impossible. But for Jon Christensen and his Minneapolis-based start-up Phoji, local businesses and intrigued funders alike are lining up to back the project.

Phoji, which hit iPhones and Android devices late January, is a free person-to-person messaging platform that gives users the ability to create custom emojis—tiny icons used in digital communication—from their own photos. More than 50 Minnesota companies have created profiles on the app, and as consumers choose to follow a business, a new direct business-to-consumer pathway is being established.

“In messages sent to a business’s followers are “clickable picture emojis—or what we call a ‘promoji’—and it could be a coupon or a deal. It’s where that real media is,” said Phoji founder Jon Christensen. “These are everything from tips, updates, or promotions for services that businesses are trying to specialize. It’s mostly things they wouldn’t put on social media.”

Local businesses such as Renters Warehouse, co-working office space COCO, future Major League Soccer team Minnesota United FC and about 25 restaurants like People’s Organic are broadcasting through Phoji. The app’s revenue comes largely from subscription fees from businesses, which range from $100 to thousands of dollars per month. Depending on the growth of its user base, Christensen believes Phoji could offer subscriptions worth millions of dollars, allowing a company total communication access to Phoji app users.

To expand its reach beyond Minnesota exclusively, Christensen says the company has a 90-day plan to grow its revenues and nationalize.

“A group of 15 to 20 people came up with the first million dollars,” he said. Part of that initial funding round was Scott Honour, an angel investor at Wayzata-based Northern Pacific Group, who is now leading Phoji’s strategy to attract other local private equity firms.

Christensen said the company is “looking at a $2 million to $5 million raise,” and so far its funding efforts have been fruitful, as it nears inking new investments worth “roughly a couple million dollars.”

A factor to Phoji’s investment allure is its status as one of Minnesota’s Angel Tax Credit companies for 2016. After being chosen by Minnesota’s Department of Employment and Economic Development for the program, investors can receive up to a 25 percent rebate on their investment.

The future of Phoji, however, lies solely in the hands of the consumer. Roughly 5,000 to 10,000 downloads were recorded in the app’s first month of Minnesota-only operation, but if Phoji receives the funding it is aiming for, the app’s chances to go mainstream could be more promising.