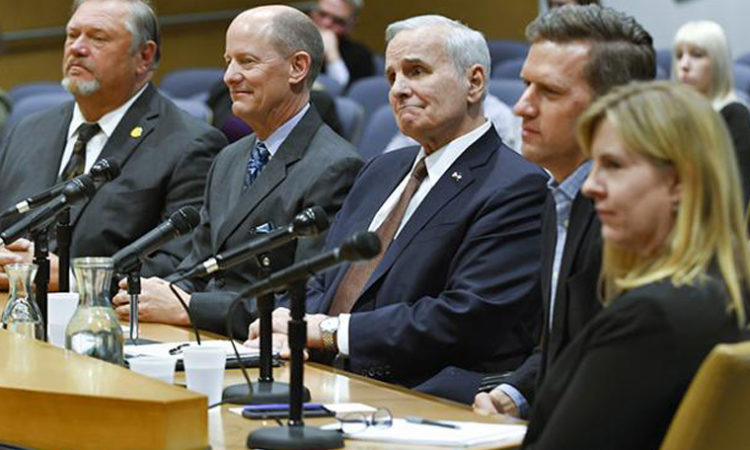 Party Leaders All Smiles During Preview of 2018 Minnesota Legislature

Taxes, bonding, and the fallout from a sexual harassment scandal are all expected to be addressed during the upcoming session.
By Briana Bierschbach
February 15, 2018

On Tuesday, at the start of an annual gathering of all four Minnesota legislative leaders and the governor, Republican House Speaker Kurt Daudt took out his cellphone and snapped a photo of the line of reporters who had gathered in a Senate hearing room to ask questions. Then he turned the camera around on himself and DFL Gov. Mark Dayton, who was just sitting down. They wrapped their arms around each other’s shoulders and grinned for a selfie, which Daudt promptly sent out over Twitter.

It was a warm moment between two men who have often been at odds over the last four years, fighting over everything from tax cuts and the state budget to how the other one conducts himself in private negotiations. “Separating the personal and the professional or political is really important,” Dayton said. “I have great respect for the speaker.”

The moment also set the tone for a decidedly friendly presession briefing between the governor and all four of the caucus leaders, who head into the 2018 Legislature on Tuesday. All wore smiles and pledged cooperation during the upcoming session, despite having just come through a particularly contentious few months since the last session.

To name a few of the battles that have emerged since last May: Dayton vetoed funding for the House and Senate, which led to a protracted legal battle that wound up in the state Supreme Court; the governor also appointed his lieutenant governor to the U.S. Senate, triggering Republican Senate President Michelle Fischbach’s ascension to lieutenant governor and yet another legal battle over whether she can serve in the Senate and as leiutenant governor at the same time. Tuesday’s gathering, moreover, came one day after two hotly contested special elections — one for a House seat and one for a Senate — which attracted national attention and plenty of party resources.

What’s more, control of the Senate is also potentially up for grabs, thanks to the GOP’s single-vote majority and Fischbach’s place in the Senate being challenged by Democrats in court.

But top leaders in the Senate said none of that is going to get in the way of their relationship at the Capitol, at least not yet. DFL Senate Minority Leader Tom Bakk said he called Senate Majority Leader Paul Gazelka before the lawsuit was filed to say: “You know, this is just business.”

“The system is designed for there to be conflict. The idea is there is that the clash of ideas will result in the best compromise for Minnesotans,” DFL House Minority Leader Melissa Hortman said. “But people shouldn’t confuse our disagreements about politics with personal dislike for one another. I think we all get along pretty well.”

It’s not uncommon for lawmakers from different parties to be friendly at the start of a session, even it quickly fades once they start debating issues. But their positive tone could also be attributed to the unusually busy year ahead.

It’s a short session in a year when the Legislature does not have to pass a budget. Yet the passage of the federal tax bill last year has created a complicated web of tax codes the state needs to sift through. An analysis by the Minnesota Department of Revenue found that adopting federal changes without changing state tax rates means the state would collect $850 million more in the current two-year budget period. That means lawmakers have their work cut out this session trying to figure out how to conform to the federal tax provisions while making it easier for Minnesotans to do their taxes — without making them pay more.

Dayton said Department of Revenue officials say this could be the most complicated tax bill they’ve ever worked on. “We need to try and make it as equitable as possible for working Minnesotans,” he said. “It’s absolutely crucial.”

“Conformity [to the federal law] in itself is a huge tax increase on Minnesotans,” Daudt said. “Now is not the time to be increasing taxes on Minnesotans. The problem is it’s very difficult to try and decipher and figure out how to hold everyone harmless. My goal would be to try and hold people harmless in this bill.”

On top of figuring out how to deal with the federal tax bill, lawmakers could have money to spend. All four legislative leaders and the governor predicted the state would have a surplus after the February budget forecast, as little as a few hundred million dollars or as much as $1 billion. Revenues have come in several hundred million over projections for the last several months.

A surplus will create expectations among interest groups, all of whom will want a piece of the pie, Bakk said. His No. 1 goal of the session is not to overcommit any available funds in either tax cuts or ongoing spending, a situation that could lead a future governor and legislature to adjourn one year with a budget deficit instead of a surplus.

“It’s much harder to be a leader when there’s some money to spend, because everyone wants to get some of it,” Bakk said. “The temptation to spend is pretty strong, regardless of who is in charge.”

‘It cannot be partisan’

On other issues there was less agreement. Both parties’ leaders are open to passing a bonding bill this year, which pays for public construction projects across the state. Bonding bills are usually crafted during even-numbered, nonbudget years, but no one can agree quite how large the package of construction projects should be, or what should be in it. Dayton wants to spend $1.5 billion on bonding this year, with a focus on fixing up state-owned buildings, college campus repairs and water infrastructure improvements.“We are behind on our state assets,” he said.

But since lawmakers passed a nearly $1 billion bonding bill last session, Daudt and Gazelka said they would push to have a much smaller bill, something well under $1 billion. They also want that bill to include more transportation projects, which Dayton didn’t include in his bill. Hortman said interest rates are low now, but they are on the rise. “We absolutely should borrow and build now,” she said.

The topic of sexual misconduct and harassment in politics has also been top of mind for leaders since last fall, when two legislators were accused by multiple women of harassment. Those legislators, former Rep. Tony Cornish and former Sen. Dan Schoen, resigned in December and were replaced in special elections Monday, but the conversation about how to create a better workplace in the Capitol has been ongoing.

After a review of harassment complaints in state agencies, Dayton said he was concerned that their process wasn’t clearly defined and left widely inconsistent punishments across more than two dozens agencies. He will propose a central office where people who work in government can file a complaint, and he hopes lawmakers will agree to pay for it this session.

Legislative leaders have agreed to mandatory sexual harassment training, which will take place the day after session convenes, and in the House, leaders also created a subcommittee on workplace safety. But what kind of recommendations could come out of that process are unclear. Hortman said she wanted leaders to create a task force on sexual harassment that would include outside experts.

Gazelka said he thinks a series of internal rule and policy changes could be the best solution, especially considering the Senate hasn’t updated it’s policy on sexual harassment since 1996. For instance, there is no way to deal with a third party who works at the Capitol — like lobbyists or reporters — who might have sexual harassment complaints, Gazelka said. And there’s no timeframe for how long it should take to investigate a complaint.

All sides agreed on one thing: The issue cannot become one that’s divided between Republicans and Democrats. “This has to be about making the Senate a better place,” Gazelka said. “It cannot be partisan, if it becomes partisan, we lose what we are trying to do, which is make this a better place for everyone.”