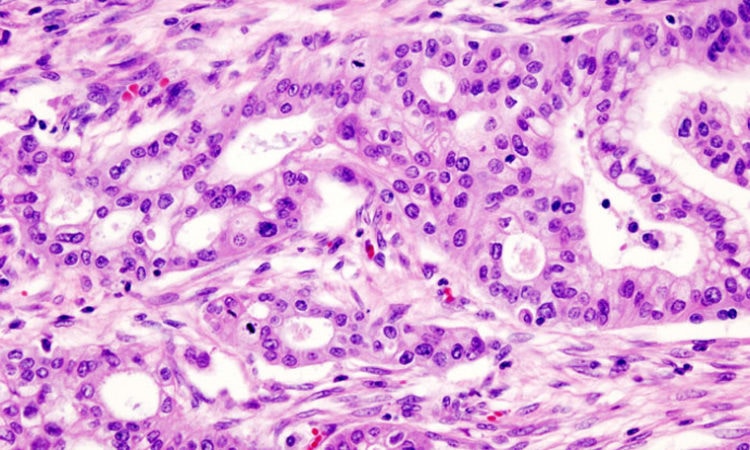 A microscopic view of a common type of pancreatic cancer known as pancreatic ductal adenocarcinoma. ( Photo by KGH/CC)

The biopharmaceutical company plans to use the money to fund a new round of human trial testing.
By Sam Schaust
March 07, 2018

Waconia-based drug developer Sun BioPharma is looking to raise $4 million to $5 million, according to the company’s president and CEO David Kaysen.

The clinical-stage biopharmaceutical company is set to kick off a new study to test its flagship SBP-101 pancreatic cancer treatment drug, but it will need financing to cover the human trial.

“We have authority to raise more,” Kaysen said in reference to a federal filing that cited the company was seeking $20 million in funding. So far, Sun BioPharma has raised at least $840,000 from 13 investors, but Kaysen suggested more has already been secured.

“We can do rolling closes on this [round], so we’re likely to do another close this week and that will increase that $840,000,” he said. “I can’t divulge [how much] but I can say we’re making good progress to that $4 million to $5 million number we’d be targeting.”

About 90 percent of the investors, Kaysen noted, were based in the Twin Cities or southwestern Minnesota region.

To date, Sun BioPharma has raised around $16 million to $17 million, Kaysen estimated. Counting Kaysen, the company boasts a staff of six at its Waconia headquarters.

Sun BioPharma was founded in 2011 by Dr. Michael Cullen, who for years had been the chief medical officer of Bloomington-based MGI Pharma Inc. before its $3.9 billion sale to the Japanese firm Eisai Co. Kaysen officially took over as the leader of Sun BioPharma in late 2015 after seven years as president and CEO of the Minnetonka-based urology products maker Uroplasty, which is now known as Cogentix Medical.

In the U.S., pancreatic cancer ranks as the third leading cause of cancer deaths in the U.S. behind lung cancer and colon cancer. More than 46,000 Americans die annually from pancreatic cancer with about 90 percent of those deaths being a result of PDA specifically.

“The five-year overall survival rate is less than 7 percent for these patients,” Kaysen said of the condition.

Sun BioPharma’s SBP-101 drug, however, is designed to curb the growth of (and hopefully kill) cancerous cells in the pancreas, resulting in a longer lifespan and increased quality of life for affected patients.

The company’s latest trial, which it is referring to as a Phase 1a/1b trial and will precede a potential Phase 2 clinical trial, will be conducted as a “triple combination” test, according to Kaysen.

“We’re combining our drug with the current standard chemotherapy which is typically provided to newly diagnosed pancreatic cancer patients,” he said. “Once we get through this trial—and assuming the drug performs—our expectation would be that by adding our drug to the other two drugs that are currently approved by the FDA, our drug would have an added benefit above and beyond what the two approved drugs do today.”

Kasen added that Sun BioPharma would also need to determine the appropriate-sized dosage of SBP-101 with that of the two approved drugs.

If all goes well, what would follow would likely be Sun BioPharma’s Phase 2 trial—including another round of fundraising—and then a request for market approval to the U.S. Food and Drug Administration.