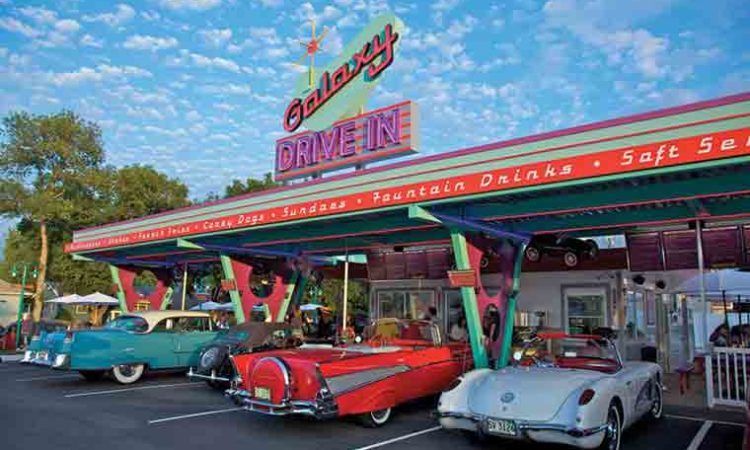 Outer Space, For Sale or Lease

Will Galaxy Drive-In ever reopen?
By Tess Allen
October 10, 2019

The huge neon signs of Galaxy Drive-In glow red over Highway 7 in St. Louis Park, but there hasn’t been a burger or malt served there in years.

Now, owner Steven Schussler—the man behind multimillion-dollar restaurant concepts like Rainforest CafÃ©—is ready to give away partial ownership of it to salvage what’s left of his dream.

The location has been a drive-in restaurant since 1951, changing names five times. Its longest stint was as the beloved Wagner’s Drive-In starting in 1979. It wasn’t fancy, but it churned out good food, especially in its final eight years under owners Alan and Jayne Wohl, when it really perfected the roadside griddled burger, garnering accolades around town. The Wohls sold to Schussler in 2009, citing an inability to fund needed renovations.

Schussler poured $1.5 million into the shack and parking lot, creating a meticulously detailed 1950s outer-space theme, replete with statuary and Jetsons-era signage. Schussler’s forte is themed environments, and in that respect, Galaxy was a home run.

But it felt entirely different than the decrepit Wagner’s and quickly fell out of the top 10 lists of burger purists. Over the next six years, Galaxy flew through a series of operators. “The people who were operating it for me didn’t serve quality food, [and] it didn’t come out in a timely fashion,” Schussler says.

In 2016, frustrated, Schussler closed Galaxy. He rents the drive-in to photographers and film directors about once a month, but that’s the only income it brings in.

He’s toyed with the idea of selling—as recently as two years ago to local chef and global TV personality Andrew Zimmern, who ultimately decided his TV commitments would not allow him sufficient time or attention. (When we contacted Zimmern, he expressed a renewed interest.)

Owning a closed restaurant isn’t cheap—Schussler spends $135,000 a year maintaining Galaxy—and he says he does not want to hang onto it another season, though there’s no evidence the place is being aggressively marketed. Schussler says he is willing to give away up to 50 percent of his ownership in the land, building, and business to incentivize the right buyer.