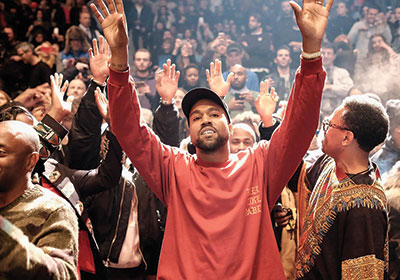 The top tickets and art picks for October.
By Tad Simons
October 10, 2016

Whatever you think of Kanye West’s ever-inflating ego, he’s excited his fans recently by releasing an album, The Life of Pablo, then continually tweaking the songs and re-releasing them, turning the whole project into an ongoing work-in-progress. The tour for this experiment in artistic fluidity comes to the Xcel this month with fans naturally wondering: What’s he going to do with these songs in concert? The only way to find out is to buy a ticket. That’s marketing genius, folks.

To honor the 50th anniversary of the Beach Boys’ groundbreaking album Pet Sounds, founding band member and bona fide living legend Brian Wilson has mounted a tour to perform the album, in its entirety, for the final time. That’s only about 36 minutes of music, though, so Wilson and his 10-piece band have been doing an entire set of hits first, then performing Pet Sounds. Wilson will be joined by former bandmates Al Jardine and Blondie Chaplin, as well as Jardine’s son Matt, who inherited his father’s vocal cords and sings the high harmonies Wilson and his cohorts can, alas, no longer reach.

Penumbra’s former artistic director Lou Bellamy returns to his old stage to continue his ongoing project of presenting all 10 plays in August Wilson’s legendary Century Cycle. Jitney is set in 1970s Pittsburgh and is about a taxi company that provides service to a neighborhood that regular cabbies are too fearful to enter.

Art of Valerian Formozov: Visions of the Russian Heartland

The Museum of Russian Art continues its Russian 20th-century Masters series with a new exhibition featuring a Russian artist whose work is disarmingly apolitical. Formozov fought in World War II, but then went to art school and subsequently devoted himself to painting landscapes and images of rural life. While you’re there, don’t miss an equally fascinating exhibit: Unknown FabergÃ©: New Finds and Rediscoveries, a show featuring more than 50 objects created by the celebrated House of FabergÃ©, many with imperial provenances.