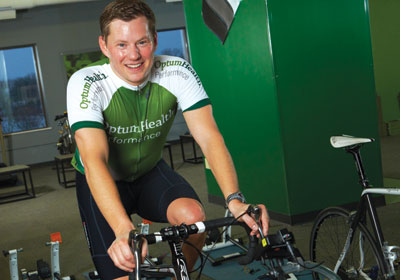 The company opens a facility for endurance training and plans to blend consumer and corporate markets.
By TCB Staff
January 11, 2011

“That’s great. You’re doing a lot of amazing things for 5 percent of our employees. What about the other 95 percent?”

Rob Webb, CEO of OptumHealth Care Solutions, says that message came from corporate clients using OptumHealth’s wellness programs, and it’s one reason for the launch of a new business. OptumHealth Performance supports triathletes, marathoners, and anyone training for endurance sports, including novices preparing for their first 5k run. If corporate wellness programs tend to do the most good for people with health problems, such as obesity or diabetes, the Performance business will focus on “the other end of the spectrum,” people who are fit and pushing themselves to be even more fit, Webb says. “And then let’s start to fill in in between.”

OptumHealth Performance is a way to capture all the “fragmented elements” that serious athletes need and put them under one roof, says Senior Vice President Frank Blackstock, who heads the new business. The elements include individual coaching, group classes, performance testing (gait and cycling analysis, underwater video for swimming analysis, metabolic testing), and a retail store selling equipment and supplies. Some coaching is available digitally, but much of the work is centered at a new OptumHealth Performance facility that opened in leased space in Eden Prairie in early November. It’s the first fitness facility the company has opened, and just as it’s a one-stop shop for endurance athletes, it’s an interesting new convergence for Golden Valley–based OptumHealth.

The Performance facility is open to the public. OptumHealth, owned by Minnetonka-based insurer UnitedHealth Group, has been getting into more consumer-facing businesses, says company spokesperson Molly McMillen. Earlier this year, for instance, it launched NowClinic online care. The Performance business is another move into consumer markets, but it also hones capabilities that OptumHealth can bring back to its corporate clients.

“Gyms and fitness clubs have looked to the potential of the employer space,” Webb says, “and they’ve tried and it’s very hard to do.” It’s expensive to build a sales infrastructure that can reach employers through the brokers and consultants they work with, he says. OptumHealth already has that infrastructure and those employer relationships. Webb and Blackstock say they’re looking at parts of the country where OptumHealth has a large employer-client base as potential locations where the Performance business can expand.

For now, OptumHealth Performance “is predominantly paid for out of the pocket of the individual,” Webb says. “But what we’re going to start to blend is an opportunity for employers to pay for some of these services.” He says Twin Cities employers are interested in the consumer-corporate mix: “Early indicators are that it’s going to be an amazing partnership.”

Start-Up Rampant View Turns iPods Into Head Cams
The $100,000 Shakedown
Corner Office-Values Added
Innovation. Companies Want It. But What Is It? That’s Where Uri Neren Comes In.
See all stories by this author >