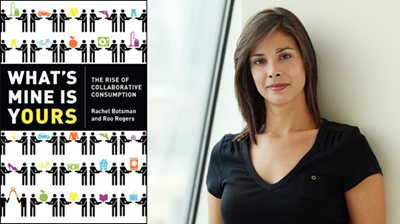 Why Buy When You Can Swap, Rent, Borrow, Barter, or Get It for Free?

The economy is moving toward “collaborative consumption,” says Rachel Botsman, co-author of What’s Mine is Yours. How will companies make the shift from selling products to selling access?
By TCB Staff
January 01, 2011

Rachel Botsman could be straight out of a retailer’s nightmare. For that matter, she might dwell in the anxious thoughts of manufacturers or anyone counting on consumer spending to regenerate a healthy economy.

“I now only buy things that are either beautiful—things that I’m so proud of that I’d want to put them on the shelf or wear them every day—or that have incredibly high utility” and high-frequency use, Botsman says. “Everything else, I actually have a hard time buying for myself or for other people, because I feel like I’m cluttering our lives.”

Botsman is the co-author, with Roo Rogers, of What’s Mine is Yours: The Rise of Collaborative Consumption. Published in September, the book now figures in conversations about an emerging global economy based on sharing goods and reusing them—bikes, cars, and DVDs, but also clothing, lawn mowers, and spare bedrooms. Some of the new business models are updates of traditional rental operations that improve on the experience of temporary ownership. Others facilitate peer-to-peer transactions: selling, renting, swapping, or lending between individuals.

As Botsman and Rogers describe it, the past century was dominated by a “hyper-consumerism” bound to collapse under its own environmental and economic weight. Its roots are in the Great Depression and the years just prior, when General Electric shortened the life of its light bulbs so people would need to buy more, and General Motors decided to “keep the consumer dissatisfied,” in the words of a GM research director. The company would make continual cosmetic updates to its cars; buyers would always feel that what they had was good, but not as good as the newer model.

Add sophisticated marketing, the advent of disposable products, and credit cards that made purchases feel painless, and hyper-consumerism took off after World War II. The size of the average American home has more than doubled in the past 50 years, Botsman and Rogers note, yet in the same time frame, an industry of self-storage units has also grown up, now totaling 2.35 billion square feet of space to hold our “stuff.”

What’s gaining momentum in this century, the authors argue, is a groundswell of alternatives that have their roots in the birth of the Internet. eBay and Craigslist now handle billions of dollars in peer-to-peer sales of used goods each year—$500 billion in eBay’s case—and have annual revenues in the hundreds of millions. But even newer start-ups, such as the swapping sites thredUp (children’s clothing) and Swaptree (electronic games and other entertainment media), have millions of registered users already. Swaptree also has attracted nearly $12 million in venture capital. And Freecycle, which facilitates the no-cost “gifting” and reuse of everything from loveseats to leftover building supplies has more than 7 million users in nearly 120 countries.

What about the businesses that might otherwise have made and sold those items new to consumers? Won’t greater reuse of goods amount to lost revenues and ultimately lost jobs? They’ll be replaced, Botsman believes.

“This isn’t about selling less, it’s about selling differently,” she says. “What I’m talking about is moving to a service model.”

Legacy players in the music industry missed their chance to do that by moving from CDs to MP3s because they “shut their eyes and wanted to believe that [change] was going to go away,” Botsman says. Now, as consumer ties to physical goods continue to loosen, “I really see the change as an opportunity,” she says. “I’m not saying that the traditional consumer industry is going away over the next 10 years, but I think this is an opportunity to get ahead of the game.”

As she sees it, here’s how some Minnesota companies could do that—and how they already are.

We Want the Hole, Not the Drill

Underlying many collaborative consumption business models is the idea that people want access to a result or an experience more than they want ownership of the object that provides it—particularly if using can be just as convenient as owning and helps them avoid burdens of cost or maintenance. That’s what’s taken the Zipcar car-sharing service to $130 million in annual revenues and operations in 32 states, and spawned similar services like local Hourcar.

Peugeot has taken this principle and extrapolated even further, Botsman says. For the past two years, the French carmaker has been growing a new service that it calls Mu. Mu members buy prepaid cards that they can use to rent cars, utility vehicles, motor scooters, and bicycles, as well as roof racks, car seats for children, GPS systems, and other accessories. Through partner companies, Mu members can also take driving lessons or book air and rail travel.

Similarly, Best Buy could “totally reinvent the category around home entertainment,” she says. “They’re selling a lot of equipment that isn’t necessarily high usage, and not only that, it’s expensive items that people typically would pay for in installments.” In fact, Best Buy is moving toward collaborative consumption of entertainment media. Last spring, it launched its CinemaNow app for downloading purchased and rented movies to the electronic devices it sells. In the summer, it began adding an electronic-game trade-in business to its stores.

IKEA is experimenting with this in some of its European markets. Recognizing that many people buy its inexpensive furnishings because they’ll only be in a place for a short time, IKEA now offers furniture rental, Botsman says. And for buyers, “IKEA has actually started—and if IKEA can do it, so can Target—a program where you can bring back your furniture that you’re bored with, and they’ll either exchange it for you or update it so it feels new again.”

Furniture is one area where Target could deepen customer relationships, but Target also sells children’s clothing, and moms are a large customer demographic: “Why don’t they start a clothing exchange” along the lines of thredUp?, Botsman asks. The stores’ shelves are also loaded with seasonal items that get used briefly and then stored, she adds. That could be the basis of a business that rents those items or somehow provides access without ownership.

Product and design innovation could result. When companies do what IKEA is doing, Botsman says, the questions become: How do you design for longevity rather than obsolescence? How do you make products so they can be taken apart and reassembled, or make their parts interchangeable? And because temporary owners still want to feel that products belong to them, “how do you customize?”

Where does a company like Minneapolis-based Itizen fit into this new economy? The start-up sells 2D barcode tags, enabling anyone to make or acquire an object, affix a bar code and register it at itizen.com, then tell a story about the object on the site. As the item passes to new owners or users, they can find that story and add to it.

Itizen doesn’t provide access to a product or service in the usual sense. It plays purely on the social aspect of items being passed along through swaps, sales, or borrowing. Is there real value created in that kind of business model, or is it an example of where the new economy turns frothy?

“Itizen is well ahead of its time,” Botsman says, and has an “Intel inside” kind of business model. It won’t be long until using a smart phone to interact with 2D barcodes is commonplace and intuitive. Once that happens, she believes, “digital notes embedded into objects is going to produce the next Flickr or Twitter,” but it won’t be just for social content.

“I could borrow your binoculars, and the interesting thing isn’t the binoculars,” it’s that “I can see all the photos you took on your safari trip, I can see your notes about birdwatching,” Botsman says. “What Itizen does means that products can carry stories, but they can also become learning devices in whole new ways.”

Collaborative Consumption in the Twin Cities

From Bags to Riches Rents out designer handbags. A sister company, BagBanco takes in old purses for cash or store credit.

Yards to Gardens Online hub connecting those who want to garden with those who have land. Participants can trade tools and supplies.