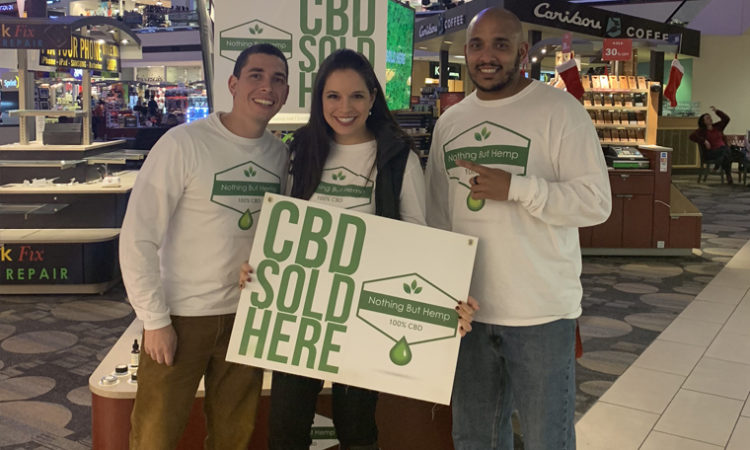 Nothing But Hemp staff at their kiosk in the Maplewood Mall. (Photo courtesy of Steven Brown)

The concept opened in Maplewood Mall in November and a south Minneapolis store is set to open next week.
By Burl Gilyard
December 27, 2018

Are CBD stores the next retail trend? Steven Brown, CEO of Minneapolis-based Nothing But Hemp LLC, says that his fledgling business is booming. CBD is shorthand for cannabidiol, a cannabis compound with purported medical benefits that does not make users feel high or stoned.

Nothing But Hemp opened its first location — a kiosk — at the Maplewood Mall in early November. Next week on January 2nd Nothing But Hemp will open a physical store in the LynLake area of south Minneapolis and plans to open a third location in Forest Lake a few weeks later. By March, Brown says, two more metro locations will be open.

“We can hardly keep the products on the shelf,” said Brown of business so far in Maplewood.

The just-passed 2018 Farm Bill legalizes CBD products at the federal level, a move that brings the business out of legal gray areas and is expected to drive strong growth in the industry.

CBD oil is derived from hemp plants, but don’t contain THC – the component of marijuana that makes people stoned or high.

“You’re not going to get high,” said Brown of CBD oil products.

Brown gained experience in the industry through branding work his marketing company, St. Paul-based SocialThis, did for California-based cannabis companies. Back home, he saw that CBD products were increasingly popping up on retail shelves.

“A lot of the [grocery] co-ops were starting to carry it,” said Brown.

While other local stores carry some CBD items, Brown sees few other retailers exclusively dedicated to the CBD niche. Another CBD store, Minnesota Hempdropz, opened in Maplewood in August.

“Real competitors aren’t in this market compared to what I’ve seen in L.A.,” said Brown. 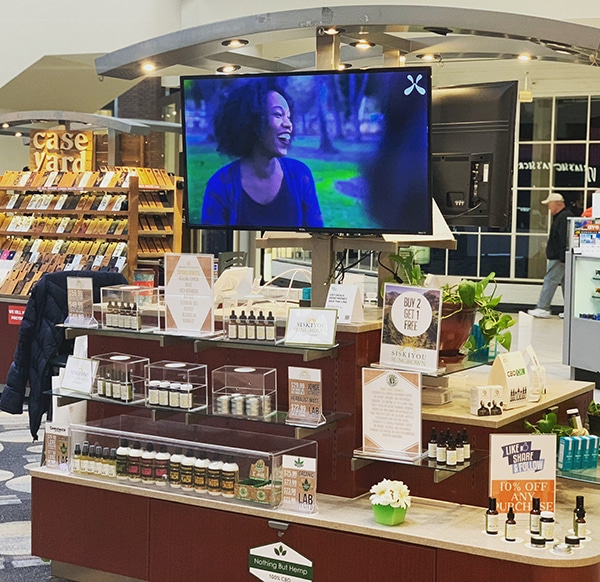 Nothing But Hemp's kiosk at the Maplewood Mall. (Photo courtesy of Steven Brown)

Brown says that the original plan was to start an online business, which was based in Nevada. But after getting online in August it was promptly shut down by its credit card processing company. “They felt CBD was a high-risk product,” says Brown.

By spring, Nothing But Hemp plans to have five local stores in operation. Brown told Twin Cities Business that a private investor, who he declined to identify, is helping to back the company. But Brown says that the plan is to go much bigger.

“We’re already working with the legal team to figure out the best way to franchise or license our brand,” said Brown.