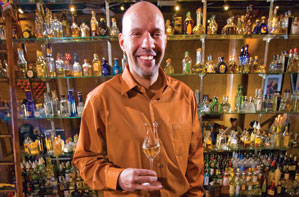 Leave Cuervo behind. A night at Barrio brings out tequila's real flavors.
By Ann Bauer
June 11, 2009

About tequila, I have good news and I have bad.

The good news is that tequila sales are growing faster than those of any other spirit, and the Twin Cities are home to one of the premier tequila bars in America. Barrio, opened last August, is a trendy restaurant innovation by Tim McKee and Josh Thoma, originators of La Belle Vie and Solera.

And here’s what you need to know if you go to sample the wares: All tequila is mescal, a fermentation of juices from various species of agave plants, but not all mescal is tequila, which is defined by the Mexican government as liquor made entirely of blue agave from the region around Jalisco. But despite tequila’s very narrow provenance, the dominant taste may be of melon, lime, smoke, or brandy. As with wine, the flavor profile is shaped with different aging tools, including oak barrels and stainless steel drums.

“People are misguided by Jose Cuervo,” says Irvin “Junior” Williams, the general manager at Barrio. “They think that’s what all tequila is like. But it can take on the characteristics of cognac, bourbon, or blended whisky, depending on how it’s aged. There’s a tequila for everyone.”

If this is true, you will undoubtedly find yours at Barrio. Williams stocks more than 130 tequilas, ranging in quality and price from the prosaic Sauza Oro ($4) to the PatrÃ³n Burdeos, a mellow tequila aged in Bordeaux barrels that has a cherry-vanilla, cigar-box flavor and sells for $95 a shot.

The environment for indulgence is spot on. Located in a slender Nicollet Avenue storefront, Barrio is a sleek black and red alley with plasma screens playing spaghetti Westerns, marionettes dancing in front of mirrors, and light sparkling out of the ceiling like stars. If you can’t decide on one tequila, Barrio will be happy to pour you a flight of three.

Williams selected one of two flights that my guests and I tried. He included Arette Suave, a sake-like tequila with a bass note of honeydew ($17), and Hornitos, a murky brew with the savor of Jim Beam ($13).

Incidentally, the food at Barrio is terrific, and utterly necessary. Between flights, we shared a few items including the finest fresh guacamole I’ve ever tasted in my life.

But I promised you bad news and here it is: I awoke the next morning—as did both of my guests—thirsty, befuddled, and feeling that peculiar hangover itch. We’re all habitual wine drinkers and we took great care, sharing just six ounces of liquor between the three of us. Yet we were undone by agave, the Mexican grape.

Barrio may be cool, but it’s dangerous. Go, but beware this tequila rage. It’s not for the faint of blood.