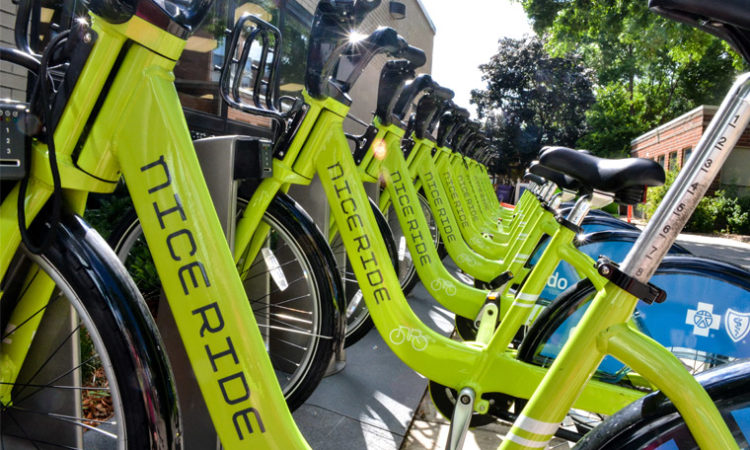 With New York-based Motivate taking the reins of the Minneapolis bike share nonprofit, the bike fleet is set to expand, boost affordability, accessibility and convenience.
By Amanda Ostuni
July 09, 2018

In tandem with the headquarters makeover, Motivate gave Minnesotans a dose of good news: it will be reducing single-ride prices and usage fees. It also announced a fleet expansion and that it would be transitioning to a dockless model.

“At Motivate, we’re committed to making cities more accessible, healthier and sustainable, and we’re thrilled to align with Nice Ride Minnesota as they begin this new chapter,” said Jay Walder, president and CEO of Motivate, in prepared remarks.

Nice Ride single rides when purchased at a kiosk will change from $3 to $2, and will only be $1 if purchased through the Nice Ride Bike Share app. Usage fees, meanwhile, will be lowered to $2 per half hour.

The Minneapolis-based nonprofit will gain 1,500 new bikes for its fleet, starting later this summer. The dockless system will be implemented thanks to mobile-friendly bikes with GPS technology, and a collaboration between Nice Ride Minnesota, the City of Minneapolis, the University of Minnesota, Minneapolis parks and urban planning leaders. Collectively, they will create 500 virtual parking zones for the bikes.

The intent of these changes is to provide users with more flexibility, and to increase access for a wider variety of people within the cities.

The team-up with Motivate will also enable Nice Ride – which was founded in 2010, and has been shifting gears regularly over the years – to better incorporate electric bikes and a winter bike program.

Nice Ride sought the partnership with Motivate and, per a statement from Nice Ride’s board of directors, the arrangement “has aspects of a transfer of assets and a subcontract.”

Nice Ride employees will be working for Motivate Minnesota, while the bike share service will retain the Nice Ride name, though name and other changes will be considered in the future.