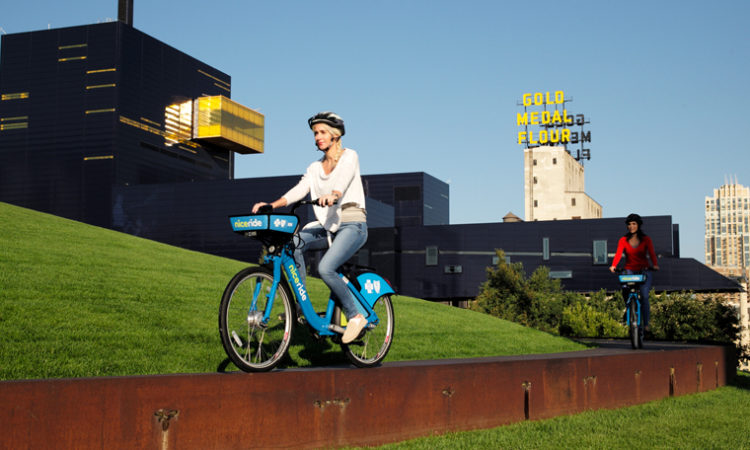 Upgrades include 575 new parking hubs, 50 new stations, a fleet of 500 pedal-assist e-bikes, and a reduced-fare membership program. The upgrades hit Minneapolis in a season where the bikes won’t return at all to St. Paul.
By Amanda Ostuni
April 03, 2019

If sunshine, birds chirping and snow-free streets weren’t enough to show spring has arrived, here’s another sign: Nice Ride Minnesota bikes are returning to the streets of Minneapolis on April 15. In what will be its ninth season of operation, the company is expanding with new offerings, including the installation of 575 new bike parking hubs and nearly 50 stations.

Also debuting this year will be a fleet of 500 Nice Ride pedal-assist e-bikes, as well as a reduced-fare membership program aimed at making bike share more accessible to lower-income Minneapolis residents.

In keeping with Nice Ride’s long-established focus on creating mobility equity across communities in the cities, placement of the new parking hubs will be prioritized to the Phillips, Cedar-Riverside, and North Minneapolis neighborhoods.

“For nearly a decade, Nice Ride has been a bike share leader in America, and the upgrades we’re introducing this riding season will build on this important legacy,” says Caroline Samponaro, head of bike, scooter, and pedestrian policy at Lyft, which acquired Nice Ride’s operator Motivate in November.

“Our partners at Lyft have put together a substantial plan that will grow our footprint significantly, recommit ourselves to our equity goals, and in just a few weeks, electrify the fleet,” says Dossett. “Riders are really going to love this next generation of Nice Ride [and] I am inspired by the future of bike share in Minneapolis.”

Notably, that future may not be shared with the other half of the Twin Cities, as Dossett says that Nice Ride bikes will not be available at all in St. Paul this year.

The reason for that is twofold, Dossett explains. For one, Nice Ride started with Minneapolis and wants to focus on its commitment to the city, which has involved securing a sole licensee contract through 2021, and now involves rolling out the latest upgrades. Nice Ride had asked St. Paul to collaborate with the City of Minneapolis, the Park Board, and the University of Minnesota to create a joint agreement on bikeshare contracts. But St. Paul didn’t go that roue, and therein lies the second problem –it would have been easier for Nice Ride to roll out all its changes in both cities if everyone was on the same page.

However, Dossett acknowledges St. Paul’s approach to bikeshares is not unlike other cities, and the situation is complicated, so he doesn’t see the city’s decision as wrong. He thinks there certainly will be an opportunity for Nice Ride to return to St. Paul in the future.

“We really want to serve St. Paul, that’s true of [Nice Ride] and that’s true of Motivate and Lyft,” says Dossett. “We have all this new capital and all these new entrepreneurs showing up… so we can have another chance to sit down and figure out how to work together, and I’m excited about that.”

In the meantime, for St. Paul’s part, the announcement that Nice Ride won’t be in the city this season comes with the notion that St. Paul has no bikeshare offerings lined up—since, as the Pioneer Press reported last week, Lime bikes also won’t return. Lime, Nice Ride’s only bikeshare competitor in the area last year, plans to reintroduce only its electric scooters in the city, and not its bike, based on “customer and community feedback.”

Reuben Collins, transportation and planner for the City of St. Paul says it’s not the city’s choice.

He says Lime decided not to bring back bikes in many of its markets because scooters are more popular. In fact, Collins says last year St. Paul had 300 scooters on the ground and about 700 bikes but the fleet of scooters generated about four times as many trips as the bikes.

He attributes the public’s apparent preference for scooters partly to the scooters being electronically-powered, and therefore less labor for the rider.

“You don’t have to show up sweaty to work,” Collins jokes.

But neither the industry trend toward scooters nor the lack of bikes coming from Lime or Nice Ride means St. Paul doesn’t intend to offer bikeshares again. Collins says St. Paul is publishing a request-for-proposals soon and fully intends to have a vendor this year.

“We’re excited to have bikesharing, we think it provides a really important transportation option for people across the city,” says Collins. “We’re eager to find that next vendor that will serve the city.”

He says they will likely target a vendor that is focused on ebikes—which Nice Ride itself is headed toward.

Ahead of Nice Ride’s return to Minneapolis, the company is offering a $10 discount on annual memberships, with the code NiceRide2019, as well as a deal of 60-minute rides throughout the season for only $65.

Typically, single 30-minute rides can be purchased for $2, and day passes are available for $6.

Says Samponaro, “Minneapolis riders are in for the best riding season yet.”