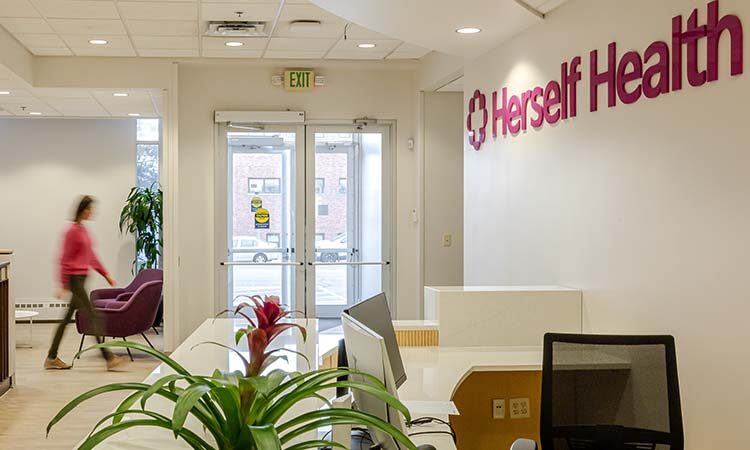 Herself Health’s first clinic is located at 2004 Ford Parkway in St. Paul.

Herself Health, a startup led by the founder of Amazon Health, has opened its first clinic in the nation in St. Paul. The company is focused on the often-overlooked health care needs of women over 65.
By Winter Keefer
January 11, 2023

By 2030, every baby boomer will be 65 or older. For women in this age group, there have been several longstanding shortcomings and discrepancies in health care.

A Minnesota-based health care startup known as Herself Health aims to tackle those gaps.  The startup bills itself as a health care technology company designed to deliver advanced primary care to women over 65. The aim is to redesign the health care experience for older women.

The company picked St. Paul as the place to launch its first clinic, which formally opened this month. Herself Health this month also locked down $7 million in seed round funding, led by founding partner Juxtapose, an investment firm.

At the St. Paul clinic, providers will provide care for a range of women’s health issues, including geriatric health concerns and weight management. The company also plans to expand its services to include home-based and virtual care.

Kristen Helton, who serves as Herself Health’s CEO, tells TCB that the company plans to expand in the Twin Cities, with the potential to open two or three more clinics in the metro this year.

“They feel that the appointments are too short. They’re navigating specialists on their own,” she said. “They’re looking for an experience that will allow them to have the time to talk through whatever their health challenges are and also to have a trusted, empathetic, high-quality health care provider to build that relationship with.”

Herself Health prioritizes the early listening phase of health care, Helton said. Though the clinic only just opened, the company has found that most of the patients who come in either don’t have a primary care physician or aren’t happy with their current primary care provider.

The concept for Herself started in 2021 with Juxtapose. The original thesis was to find a way to serve older adults. After surveying different groups, Juxtapose found most were asking for health care solutions rather than products or ideas. Juxtapose recruited Helton in the summer of 2022 while also recruiting physicians. By the end of the year, the new CEO stepped into the role and the clinic was able to open in early January.

Helton brings a range of experiences to her leadership role at Herself Health. She is an engineer by training, but she says she has always gravitated to health care. She previously co-founded the integrated biosensor company Profusa. After receiving a PhD in bioengineering from the University of Washington, she founded a biosensor company to help people with diabetes manage their health better.

In 2015, Helton joined Amazon, where she was able to “think big” in the healthcare space. She ended up founding Amazon Care, a “virtual-first” health care service. The platform was first built first for Amazon employees and then expanded to serve other employers and their workforces. Amazon Care patients used an app to connect with a doctor or nurse, tell them about symptoms, and get a diagnosis. But if the provider needed more information, a nurse could be dispatched to a patient’s home to do tests or take vitals.

“It was really a new model of delivery at the time,” Helton said, adding that she built Amazon Care from a paper she presented to Jeff Bezos. She then built Amazon Care to scale before deciding she wanted to build again.

“I was eager to get back into the startup realm,” Helton said of her transition to Herself Health.

Amazon Care shuttered at the end of 2022.

The research done by Juxtapose was compelling to Helton. It showed a need for value-based care in this group of patients, she said.

“I felt that the opportunity to serve older adults was just really wide open and unaddressed. And, frankly, it’s when women have more needs and more complexity in their health care,” she said.

Helton is based in Seattle and much of the company’s team is spread across the country, while clinical and operations workers are in the Twin Cities.

“I think for a startup company, it’s almost a must that you maintain that flexibility,” she said. “People want that coming out of Covid. They want the flexibility to have a great job, but also they value their own place and community.”

The team decided to open its first clinic in the Twin Cities for multiple reasons. They found there was a high number of women who are 65 and older in the area. The Twin Cities and its surrounding area is also a hub for medical advancements between many universities, hospitals, and health institutions like the Mayo Clinic, making it easier to hire additional staff as Herself expands.

Helton said she will visit the Twin Cities often while building local partners and trusting her team.

“There’s a great, vibrant health care community in the cities,” Helton said, adding that part of the success in opening so early into the year came from finding a team of leaders and physicians in the area.

She noted this flexibility in in-person and virtual work also often benefits the patient, a lesson she learned while building out Amazon Care.

“Health care sometimes becomes very fragmented,” Helton said. “When the doctor’s office is closed and patients go to urgent care centers because they need to be seen or are looking for that access, then you start to get disconnected care. So I think it’s very, very important for us that we build a practice that can serve our patients during what I’ll call the normal clinic hours.”