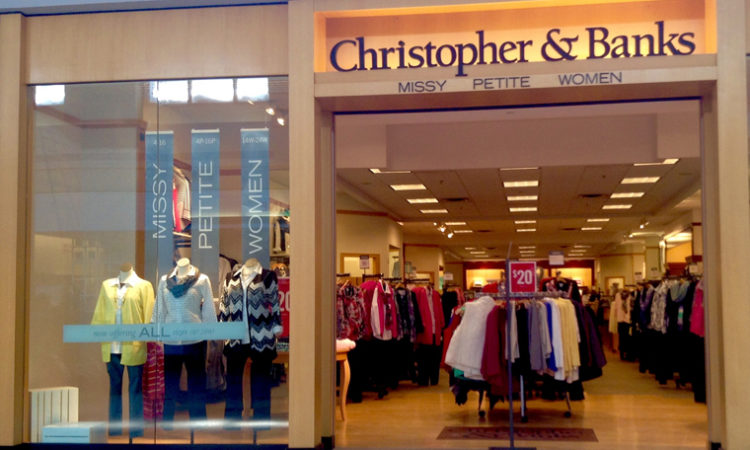 The bright spots in its first quarter report were in sales online and at its outlet stores.
By Burl Gilyard
May 31, 2018

Sales are continuing to decline for Plymouth-based Christopher & Banks Corp., a retailer of women’s apparel and accessories.

The company now has new leadership: Keri Jones, a 27-year veteran of Minneapolis-based Target Corp., became its new president and CEO in mid-March. Prior to joining Christopher & Banks, Jones had been an executive at Pittsburgh-based Dick’s Sporting Goods. Jones was only at the helm for about half of the first quarter.

“Our first quarter financial results did not meet our expectations due in part to underperformance in woven jackets and bottoms, and unseasonable weather, particularly in our Midwest and Northeast regions. However, we saw momentum continue in our eCommerce business as well as in our outlet stores, both of which delivered positive sales comps in the quarter,” said Jones in a statement.

About two-thirds of the company’s stores are under the Missy, Petite, Women’s banner. It also operates Christopher & Banks, C.J. Banks and outlet store locations. The company operates a total of 31 stores in Minnesota under all of its brands. Outlet stores have been a growth category: the company opened its first outlet location in 2011 and now has 78 outlets.

Despite the overall decline in sales, Christopher & Banks reported a 7.8 percent increase in digital sales for the quarter. Jones also said that stores were starting to see some growth in comparable store sales in the early stages of the second quarter. (Comparable store sales measure sales trends for stores that have been open for at least a year.)

“Sales performance improved as the weather became more seasonal during the latter part of the quarter as customers responded favorably to our product offering. This sales momentum continued into May, resulting in positive comparable sales in the low single digits quarter-to-date,” added Jones.

In April, the company sold its headquarters building in Plymouth to investors for $13.7 million and signed a deal to lease the facility for 15 years. Such sale-leaseback deals are common, particularly for companies looking to raise capital for other investments.

For the full fiscal year 2017, Christopher & Banks posted a net loss of $22 million on sales of $365.9 million, reflecting a 4.1 percent decline in annual revenue. C&B has posted net losses for its last three fiscal years. The company has closed nearly 25 percent of its retail locations since the start of fiscal year 2013 when it had 608 stores.

The company’s board fired CEO LuAnn Via in January 2017. Via, who spent four years at the helm, had previously been CEO of Payless ShoeSource. Joel Waller served as interim CEO and president for 14 months before Jones stepped in as the new leader.