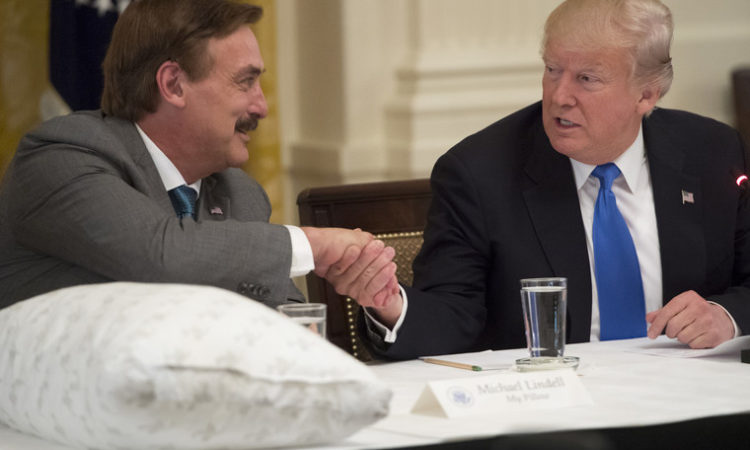 Michael Lindell, of the well-known brand My Pillow, sued an industry peer for the second time citing name and advertising technique poaching.
By Amanda Ostuni
January 30, 2018

What’s in a name? To Michael Lindell, inventor and founder of My Pillow, the answer is enough worth suing over as he’s taking a competitor to court over trademark infringement.

On behalf of his Chaska-based company, Lindell filed a complaint on January 24 against Michigan-based I Love My Pillow (LMP Worldwide), citing issues with their name similarities and arguing LMP has taken unfair advantage of the connection.

Offering a timeline of events in the document, Lindell stated that he initiated the trademark request process for “My Pillow” under the LLC Night Moves Minnesota in 2004; it was officially registered in 2008; and in 2009, it was assigned to the company My Pillow, which has used it ever since. Lindell adds that in 2014, the U.S. Patent and Trademark Office accepted a declaration of incontestability on the trademark. Meanwhile, Lindell said LMP president Mark J. Arthurs’ first use claim to his “I love My Pillow” trademark was in 2007, although the entire interest wasn’t assigned to LMP itself until 2016.

This lawsuit isn’t Lindell’s first legal battle, nor is it his first tangle with Arthurs. In addition to being on the other side of a lawsuit — as multiple cases were brought against My Pillow two years ago for unsubstantiated claims of medical benefits, among other misrepresentations — Lindell previously sued Arthurs for infringement.

The dispute was settled out of court in January 2013, but Lindell argues LMP has repeatedly violated the terms since then. Lindell sent a warning letter last December, and when no action was apparently taken, he terminated their agreement and filed the suit.

One term of the settlement was that “LMP shall not purchase nor use ad words (or the equivalent thereof) on any search engine for the word ‘my’ and ‘pillow,’ together as one word or separate as two words, unless it is accompanied by another word or other words.”

To show an example of such a violation, Lindell provided a Google search screenshot in his complaint, in which the second hit for “mypillow com” led to ilovemypillow.com due to a special LMP offering called the My Pillow coupon.

He also argued that instead of discontinuing the use of My Pillow and working to limit the similarities, as their settlement suggested, LMP seized upon customer confusion and aggressively targeted My Pillow.

In his complaint, Lindell said that in an email from an LMP employee to a customer, the employee said, “[we’re] confident going head to head with other pillows, especially My Pillow,” and then, “I’ve been with this company for 3 years and I can’t tell you how many calls I get from customers wanting to return their My Pillow thinking we are the same. 8/10 They end up buying from us.”

Moreover, Lindell described a purported violation-riddled LMP radio commercial, citing its frequent use of the phrase “my pillow,” and pointing out lines he felt mocked him or blatantly copied My Pillow. One bit involved a pitchman convincing customers that having to scrunch and adjust a pillow is a good thing. This allegedly referred to what Lindell does in his commercials, and the boasts of “proprietary foam,” a product “handcrafted in the heart of America,” and a “money-back guarantee” were all traits of My Pillow’s pre-existing advertisements.

It’s these multiple examples of perceived violations that served as the basis for the suit’s “breach of settlement agreement” charge, the complaint said. The suit charged LMP with one count of federal trademark infringement.

As punishment and restitution, Lindell asked that the court order LMP to stop manufacturing or marketing and to recall and surrender for destruction all products rooted in infringement. He also asked the court to order LMP to surrender their domain ilovemypillow.com, to cancel their “I Love My Pillow” trademark and other My Pillow-linked marketing registrations, as well as proof of compliance and an awarding of financial damages.

It remains to be seen whether the dispute will be heard in a trial by jury, as demanded in the suit.