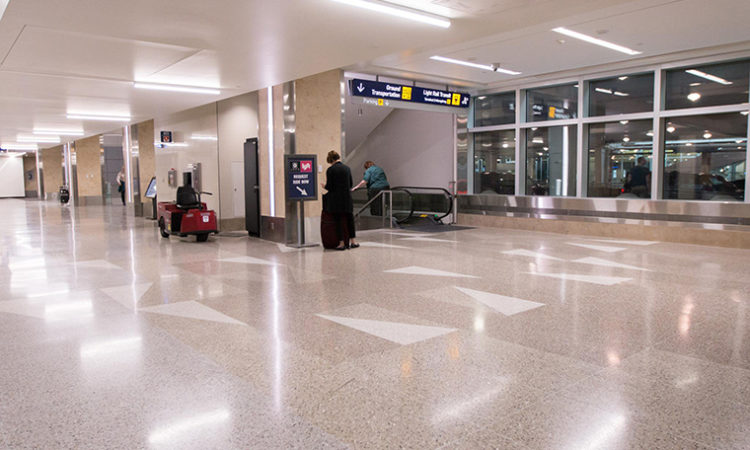 Don’t have TSA PreCheck? You’ll have to use the northern checkpoint if you're flying out of Terminal 1.
By Christopher Lemke
August 20, 2019

Minneapolis-St. Paul International Airport on Monday began sending all non-PreCheck passengers flying out of Terminal 1 to a single checkpoint.

Several media outlets reported that the change led to long lines and confusion on Monday. But airport officials don’t expect wait times to be affected once people understand which checkpoint to go to, said spokesman John Welbes.

“[The remodeling project] was designed in five stages so that we can keep the checkpoint open throughout the whole work process,” said MSP Airport spokesman John Welbes. “We’re reconfiguring the lanes a bit to take some of the traffic to the north. But the capacity as a whole will stay the same.”

The remodeling work is expected to wrap up in mid-December.

As part of the project, crews will install new terrazzo flooring at the southern checkpoint queuing space. The current flooring is worn out after many years of use, Welbes said. It’s estimated that MSP serves as many as 30 million passengers each year.

The remodeling work will be done at night.

“The lanes will have to shift a little bit, but we are always providing enough lanes to keep us up to capacity,” Welbes said. “We should see business going on as normal,” he said, although airport workers will monitor the lines each day to see if adjustments need to be made.

Other project components include pushing out the terminal’s front wall for additional services, seating area, and queuing space; creating space for artwork; and adding restaurants and elevators.

The south security checkpoint also will get expanded in another year or more, Welbes said.

The past few years have been busy for Terminal 1. The concession program has seen 50-plus openings in the past few years, while the InterContinental Minneapolis – St. Paul Airport hotel opened next door in 2018. There are also plans for a new parking ramp with 5,000 parking spaces.

“It’s like a chess game of moving stuff around within in a confined space, and we’re doing it very efficiently,” Welbes said.