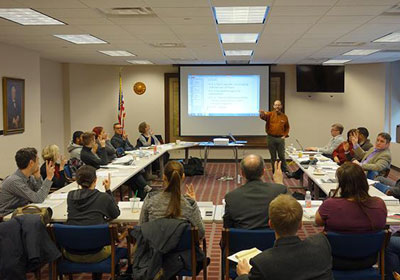 Minneapolis would be the first city in the state to have a mandatory paid sick leave ordinance, though St. Paul has signaled that it also expects to adopt one following a public process.
February 26, 2016

The Minneapolis task force charged with examining the issue of mandatory paid leave has two more scheduled meetings before its deadline for reporting back to the City Council.

But the big decision — whether to recommend giving all workers in the city paid leave — is all-but-formally decided. The recent work of the 15-member Workplace Partnership Group has been on the details of a mandate, rather than whether such a mandate should be recommended to the council.

Minneapolis would be the first city in the state to have a mandatory paid sick leave ordinance, though St. Paul’s City Council signaled that it expects to adopt a similar policy following a public process to seek opinions from residents and business. And 27 governments across the United States — mostly individual cities — already have some form of paid leave requirement.

The resolution creating the work group did not direct it to return with an ordinance at all, let alone one that would mandate paid leave. Council leaders were clear, however, that they wanted something.

“I have an expectation where we’re not asking for a product where … the committee votes to say, ‘Well, just don’t do one at all,’” said Council Member Elizabeth Glidden. “We’re asking for something different. We’re asking for a recommendation on ‘what’ and the question of ‘how specific’ is also important.”

The work group itself was a strategic retreat by Mayor Betsy Hodges and the council after a much-broader Working Families Agenda drew loud criticism from the business community. It was the opposition from small businesses in particular, especially restaurants and retailers, that seemed to catch the mayor and council most off guard. A proposal to require advance work schedules — the most-controversial aspect of the agenda — was tabled, while the less-controversial, if still contentious, sick leave issue was assigned to the work group.

But even the makeup of the work group caused disagreement. As initially presented by Council President Barbara Johnson and Council Member Andrew Johnson, the group was to have 15 members appointed to represent specific groups or “stakeholders”: employees, organized labor, employers and business associations.

But the attempt to produce a work group with membership roughly divided among the varying perspectives wasn’t enough for some on the council who were concerned that the panel might not favor what they favor: a paid leave mandate. Council Member Lisa Bender, for example, offered an amendment that would have required an equal division between labor and management with the 15th member representing public health.

“I think it is very reasonable to suggest that a work group focused on workplace standards for workers contain half workers,” Bender said before her amendment was defeated. Council Member Alondra Cano wanted the panel run by co-chairs — one from each side. The council voted that down as well.

Finally, Andrew Johnson moved to amend his own ordinance to require a membership “balanced” between the stakeholders. That carried. Later, four alternates — one each representing employees, employers, labor and business associations — were added.

But while the membership subgroups were balanced, the points of view of those appointed from each category never appeared to be. Almost from the start, a majority indicated support for the mandate. While the membership is distributed among business and worker, labor and management, not all of the individuals meet the stereotype of their group.

Danny Schwartzman, who is an owner of Common Roots Cafe and represents employers, for example, has been an advocate for a paid leave policy as part of the Main Street Alliance. Molly Glasgow, owner of Point Accupressure and a member of the Independent Business Association, was appointed to represent business associations. She too has been a supporter of a paid leave requirement, though with a tiered system that would treat smaller businesses differently from larger businesses, something found in ordinances in other cities.

For the most part, those representing labor and employees have also been reliably supportive of the mandate. Only Sarah Webster Norton, a restaurant worker who represents employees, has been skeptical of the mandate. But as an alternate, she is unlikely to have a vote on the final plan.

At a minimum, backers of the mandate have eight of the 15 votes needed to recommend an ordinance that would require all employers to allow workers to accrue paid time off for their own illnesses or to care for sick family members. A provision for “safe time,” which could be used by domestic violence victims, would also be paid.

At an earlier meeting, Steve Cramer, president of the Minneapolis Downtown Council, said it was clear that the group was going to end up with a mandate and wondered if there were any reason for him to continue attending. “I’ve been at this for a while and I can count noses,” Cramer said.

The meetings have been mostly collegial, with a hired facilitator trying to help the group find consensus. It has not been devoid of lobbying and speech-making, however. Several times, when Cramer asked that the group consider the economic impacts on employers, he was met with the reading of studies and reports that assert there is little negative impact on employers or the economy in general.

At one point last week, after one bout of dueling research citations, Neighborhoods Organizing for Change’s Ron Harris suggested a cease-fire of sorts. “I think we’re here to solve a problem,” he said. “We’re not here to win a war or win a battle.”

To Harris, that problem is that not everyone has access to paid sick leave and might, therefore, choose to work when sick rather than stay home and lose income. Lack of paid sick leave falls most heavily on lower-wage workers.

The group decided to wait until after its meeting Wednesday to gauge whether it should hold a final meeting Feb. 22 or request an extension on its deadline. Currently, the task force is to present its report to the council’s committee of the whole on Feb. 24 — just over three months since it was commissioned by the council. All of January was spent on 14 “listening sessions” with specific groups in the city.

Cramer seemed to acquiesce to the inevitability of a mandate last week when he requested that the group be given more time not to keep discussing and debating the details but to have a chance to brief — and perhaps warn — their constituencies. If it keeps to its current pace, the group could finish its report and present it publicly just two days later.  At that point, Cramer said, “the cat is totally out of the barn.”

He warned that if it “hits the council like a lead balloon and people come out of the woodwork from various perspectives — either for it or against it — we haven’t done a very good service for the council.”