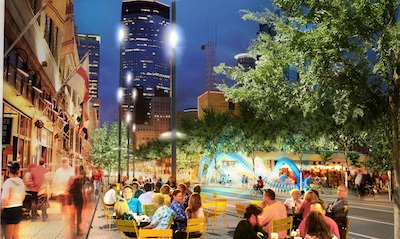 The City of Minneapolis and the Minneapolis Downtown Council have selected James Corner Field Operations to develop a design concept in a roughly $40 million redesign of Nicollet Mall.

The New York-based urban design and architecture firm—whose previous design projects include the High Line park in New York and the Queen Elizabeth Olympic Park in London—was one of three finalist teams to present their proposals at a public event at the Guthrie Theater on Tuesday. A panel of 13 design judges selected the three finalist teams from among 20 initial proposals submitted by firms from around the world. In addition to James Corner Field Operations, Montreal-based Daoust Lestage, Inc., and a collaboration between Berkeley, California-based Tom Leader Studio and New York-based !melk urban design, LLC, were named finalists.

Peter Brown, an architecture consultant to the City of Minneapolis, told Twin Cities Business that the panel judges were particularly impressed by James Corner Field Operations’ knowledge in matters such as sustainability, urban tree planting, paving materials, lighting options, bike-friendly solutions, and operation costs. Brown added that while the firm is based in New York, several of the design team’s members are originally from Minnesota, making the team an ideal candidate to lend its local expertise and develop the Nicollet Mall redesign idea.

The Minneapolis City Council will consider final approval for James Corner Field Operations’ proposal on October 4. Following final approval, the architecture firm and the Downtown Council will work together to develop the official design—during which time they will meet with Nicollet Mall business owners and constituents to receive their input. Construction is scheduled to begin in the summer of 2015, and it is expected to be completed in the summer of 2016.

The redevelopment project—expected to cost between $35 million and $40 million—is funded by a combination of state bonds and private investments, Brown said.

Minneapolis Mayor R. T. Rybak said that the Nicollet Mall redesign project is an opportunity to restore the downtown center of commerce to its original stature.

According to the Nicollet Mall Project website, more than 34 million square feet of office space exists along the mall and approximately 13,000 new jobs are anticipated to be created as a result of the redesign project. Public companies such as Target Corporation, Xcel Energy, Inc., and Wells Fargo Company’s Minnesota headquarters, are located along the corridor.