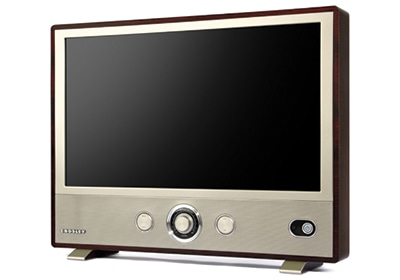 More Than A Black Square

A next-gen Pellegrene partners with Target to create an old-school TV.
November 03, 2014

Joe Pellegrene has a solid local retailing pedigree. His father, John, was a Target marketing legend. The youngest of five boys, Pellegrene says the whole clan has retail in the blood. For him, that translated into his firm, Pellegrene & Associates, which designs, markets and sells mostly small electronics with retail partners such as Target and Best Buy. Their work has appeared under brand names such as Polaroid, Sunbeam, Rust-Oleum and Oster. The firm, founded in 2002 and currently based in Deephaven, also runs its own house brands such as Cre8, Ohm and IO.

With such a strong connection to the Fortune 500 retailer, Pellegrene is always pitching unique products to Target. After developing TVs for Polaroid, Pellegrene wanted to add some style to what he saw as a drab, black-box market, with every brand’s TV indistinguishable from the next.

“High-end consumer electronics manufacturers have begun using retro design to blur the lines between tech, furniture and dÃ©cor,” Pellegrene explains. “We saw an opportunity to align with Target’s brand equity [affordable design] and bring differentiation to the Target TV assortment.”

Last fall, he approached the Target merchants with an idea. They in turn, introduced him to Crosley, the Kentucky-based electronics brand that already has a line of retro-esque audio systems sold at Target. It was a natural fit—though the last time Crosley made TVs was in 1959, says the company.

“We wanted to make sure the TV fit with their current range of audio products,” Pellegrene notes. “We took an example of one of their own products. . . . The hipsters will be all over this.”

Pellegrene thinks a Mad Men-style TV will succeed where other retro nods have failed. The key is integrating new technology: the TV doubles as a monitor, is equipped with 1080p hi-def and has front-firing speakers with amped-up wattage. Though he declined to name the specific technology, he hinted at another feature where “you can potentially beam music from other devices to the TV,” he says. The set is available at Target, but Pellegrene says deals with other retailers (some local) are in the works.

“We have our loyalty to Target,” Pellegrene says. “We have a special spot for it, obviously.”