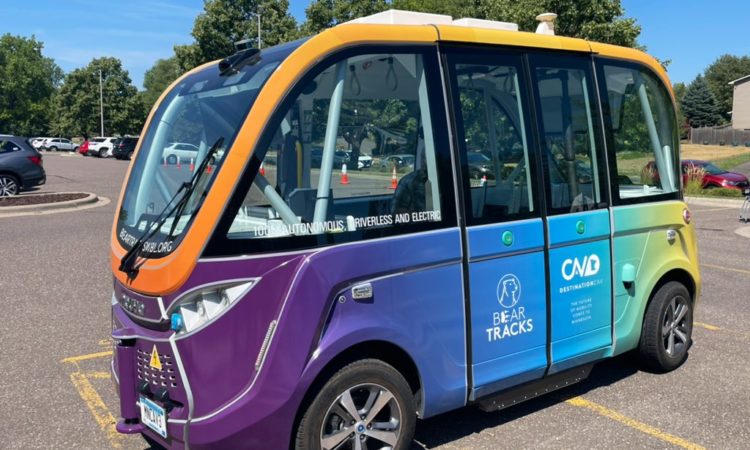 The driverless shuttle project will move passengers along a 1.5-mile route in White Bear Lake. MnDOT on Twitter

The Minnesota Department of Transportation is partnering with a French company to test an automated shuttle project in the Twin Cities suburbs.

Last week, the department announced that it’s working with France-based Navya to test a driverless shuttle in White Bear Lake. Known as Bear Tracks, the pilot project will offer free public transportation along a 1.5-mile route through August 2023. MnDOT officials say it’s designed to reach people who have been “historically underprioritized in transportation planning processes,” such as people with disabilities, older folks, and low-income residents.

The idea came to be two years ago when the city of White Bear Lake submitted a proposal through MnDOT’s Connected and Automated Vehicle (CAV) Challenge project, an open procurement process designed to improve transportation options through automation. The partnership became official in April 2022, says Cory Johnson, project lead in MnDOT’s Connected and Automated Vehicle office. The state of Minnesota is investing $900,000 total in Bear Tracks.

“This specifically covers project costs including planning, design, shuttle commissioning, one year of operation of the shuttle, and a full evaluation when the project concludes in 2023,” Johnson says.

“We need to observe and experience how the technology operates along a suburban route, how it interacts with the other drivers and pedestrians along the route, how it works with passengers with all types of abilities, how safety is factored into the operations,” Johnson says.

Though the shuttles are driverless, each will have an attendant to monitor the shuttle’s operation and safety. The attendant will also assist passengers when necessary. The shuttle will follow a short route between the Phoenix Alternatives Inc. day program and the White Bear Lake YMCA.

Bear Tracks is the second of three driverless shuttle projects across the state. The first took place in Rochester, and another project is planned in Grand Rapids.

“The future is undetermined, but we feel it’s exciting,” Johnson says.