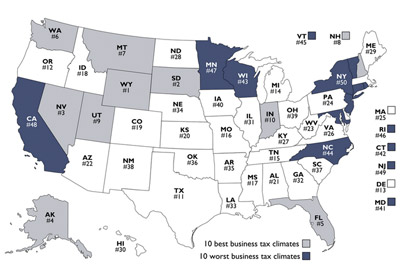 A new report ranked Minnesota as the fourth-worst state for business taxes, although a separate study last month named the state eighth-best for business overall.

The business tax ranking is based on data released by the Tax Foundation, a Washington, D.C.-based organization that bills itself as a non-partisan tax research group. The rankings are based on a business tax climate index that compiles information about hundreds of tax provisions for each state and compares them to one another.

The National Federation of Independent Business (NFIB), a small business association, used the study as an opportunity to urge Minnesota lawmakers to “change course.”

“Minnesota’s near-bottom ranking in a national survey should convince lawmakers and Governor Dayton that the state doesn’t have a bright future as one of the highest-taxed places in America for successful entrepreneurs and investors,” the NFIB said in a statement.

The Tax Foundation cited Minnesota specifically as dropping two spots due to the recent package of tax changes that include a retroactive hike in the individual income tax rate.

“We are clearly moving in the wrong direction,” NFIB Minnesota State Director Mike Hickey said in a statement. “Minnesota went from bad to worse in this survey, and I can guarantee that business investors all over the country are taking notice.”

The NFIB said that unless Minnesota adjusts its tax policies, the state won’t be able to compete with nearby neighbors whose business taxes are substantially lower.

When Minnesota lawmakers increased cigarette taxes, hiked taxes for higher earners, and closed what Dayton described as “corporate tax loopholes,” both South and North Dakota saw it as an opportunity to lure businesses to their land of lighter taxation.

While the Tax Foundation study placed Minnesota near last for business taxes, a recent Forbes list actually named Minnesota the eighth-best state for businesses in 2013. In fact, the state jumped 12 spots from the 2012 list.

While Minnesota still didn’t fare to well for business costs on Forbes’ list, it was pulled up by other factors—namely, its high quality of life, its economic growth prospects, and its sizable labor supply.