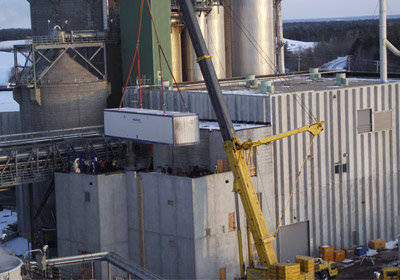 Sappi Fine Paper has successfully converted its Cloquet paper mill into a producer of pulp used in textiles.
November 09, 2013

The owner of a large mill in Cloquet said Wednesday that the facility has been successfully transformed from a producer of pulp for paper into one that makes “cellulose pulp,” which is used in textiles.

South Africa-based Sappi Fine Paper said last year that it was making the conversion. On Wednesday, the company held an open house at its Cloquet mill and said it finished the $170 million project “on time, within budget, and safely.”

Sappi bills itself as the world’s largest manufacturer of “specialised cellulose,” which is also known as “dissolving wood pulp” and can be used by manufacturers to produce textile fibers, as well as pharmaceutical, beauty, and household products. Sappi has a capacity to produce more than 1.3 million metric tons of specialised cellulose a year—including 330,000 metric tons at the Cloquet facility.

Sappi said it has also expanded its specialised cellulose operations in South Africa.

At peak construction, the project employed more than 1,100 workers who put in more than 550,000 hours, the company said, adding that “product output has exceeded quality targets and the production capacity is currently fully-secured to fulfill customer orders.”

“Sappi’s investment in the Cloquet mill reinforces our position as a worldwide leader in the specialised cellulose market, demonstrating our reputation of reliability and technical know-how,” Mark Gardner, president and CEO of Sappi’s North American operations, said in a statement.

At Sappi's Cloquet mill, the company had previously produced pulp for its own line of high-gloss paper. Sappi will continue producing high-quality paper in Cloquet, but it will now buy paper pulp from other mills, according to a Star Tribune report.

“Excellence in coated paper manufacturing continues to remain a top priority at Cloquet,” Sappi said Wednesday, adding that the company recently invested $15 million in new and upgraded systems for that portion of its business.

Sappi’s mill conversion—which represents a rare move in the market—comes as the paper industry has fought with decreased demand and Minnesota’s wood products industry has encountered a number of headwinds. For example, Boise, Inc., an Idaho-based manufacturer of packaging and paper products, has been laying off employees in International Falls.

Last fall, Verso Paper Corporation announced it would permanently shutter its Sartell paper mill that was damaged in an explosion and fire. That mill employed about 260 people.

Wausau Paper Corporation also announced plans this year to close its Brainerd mill, putting about 130 people out of work.