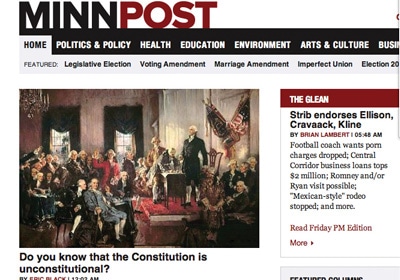 Lessons learned at the state’s most influential journalistic startup.
November 22, 2012

“One thing has stayed true from the day we launched: We wanted to be more like, say, the Atlantic or Salon.com—a place of real journalists and real reporting but very analytical, point-of-view in our articles and voice,” he says. Those voices have changed. At first, MinnPost relied on freelance vets excessed from the dailies. MinnPost now has a regular staff of 18 as well as eight contract freelancers. Staffers are younger and more tech-savvy, but also less experienced.

When it launched, MinnPost relied on foundation “seed capital.” These days, about 55 percent of MinnPost’s roughly $1.5 million budget comes from donors; advertising is 25 percent, and foundations 15 percent. Kramer says MinnPost has 240,000 unique visits to the site each month, or roughly 11,000 each weekday.

While the site posted “small surpluses” the past two years, Kramer says it usually doesn’t have much cash on hand. He and wife, Laurie (who serves as chief revenue officer), don’t take a salary. For long-term stability, “we need to know that whoever succeeds us can take pay.”

He’d like to add more journalists to report the “great stories that our readers tell us they wish we would cover,” in beats such as health care and emerging growth businesses. In short, Kramer is looking for more stability. There’s no guarantee MinnPost will find it, but in the current journalism sector, that’s old news.