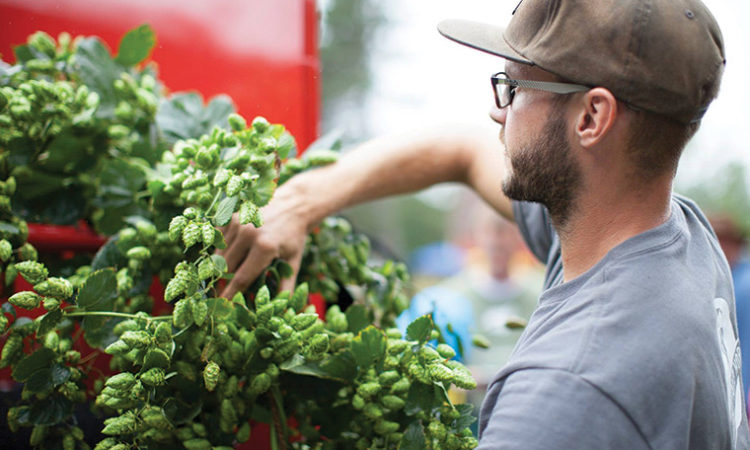 Starting a hop farm was an easy decision for Eric Sannerud and Ben Boo, who founded Mighty Axe Hops in 2013. The state’s craft beer industry was booming and there was little competition. Now they own the largest hop farm in the state.

“We were interested in beer and farming, so hops were an obvious choice,” says Sannerud, who is CEO.

What started as a side gig while Sannerud and Boo were in college has grown into a full-time commitment for the two. Last season, they bought 80 acres of land in Foley, Minn., and built a harvest facility on-site. Prior to the expansion, they were operating 3.5 acres on Sannerud’s family farm in Ham Lake.

“There are only about 30 more acres of hops [grown in Minnesota],” says Sannerud.

While there are more than 100 breweries in Minnesota, less than 1 percent of those breweries’ hops are grown in state, according to Sannerud. More than 90 percent of the nation’s hops come from the Pacific Northwest.

Sannerud isn’t necessarily focused on growing the number of breweries that Mighty Axe Hops sells to. He’s more interested in increasing the quantity of hops he sells, whether that’s adding new breweries to their list or increasing the amount of hops their current vendors purchase.

Last season, everything produced was accounted for. Sannerud hopes to double or triple their yield next season. “Hops are perennials; it takes more than one season to get the full yield,” he explains, which is about 1,500 pounds per acre.

Besides increasing the number of hops grown in Minnesota, Sannerud and Boo plan to eventually start selling their hops nationally and internationally. “We would also like to share some of our equipment with other growers in the industry,” adds Sannerud. “It takes a lot of equipment to run a hop farm.”

Hops are the green, cone-shaped flowers of the female hop plant, known as Humulus lupulus. Hops are full of alpha acids, which are the primary bittering agent brewers use to balance the sweetness in beer imparted by grain during the brewing process. Hops are also a concentrated source of the essential oils that lend many beers their signature flavors and aromas.

(Source: KegWorks)
See all stories by this author >