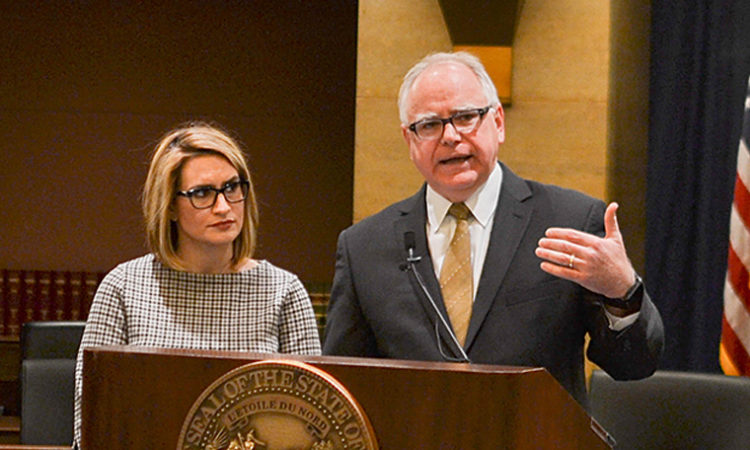 Tim Walz said some school districts lack the money to properly train an adequate workforce thanks to the stateâs over-reliance on local property taxes to pay for schools. ( Photo by Walker Orenstein)

The tight labor market caused by retiring baby boomers is an immediate problem, and its pinch on growing businesses is only going to get worse.
By Walker Orenstein
December 13, 2018

Minnesota’s budget forecast last week had some at the Capitol celebrating the $1.5 billion projected surplus powered by an expanding economy. Yet the forecast also came with a more dire message for state leaders: the tight labor market caused by retiring baby boomers is an immediate problem, and its pinch on growing businesses is only going to get worse.

Top lawmakers from both parties fretted over the worker shortage during news conferences at the Capitol on Thursday and offered some brief thoughts on how they want to help fill Minnesota’s open jobs once the Legislature convenes in January.

Outgoing Speaker of the House Kurt Daudt suggested the state improve at enticing young people into trades and manufacturing — two industries struggling to fill positions. Gov.-elect Tim Walz said some school districts lack the money to properly train an adequate workforce thanks to the state’s over-reliance on local property taxes to pay for schools.

No matter the strategy lawmakers eventually take, the budget forecast report shows just how difficult solving the shortage of workers will be going forward. Here are five facts from that report which illustrate the problem:

1. There have been fewer unemployed job-seekers than open jobs for the past 18 months

This measure of the economy has at least some lawmakers ecstatic. “Any Minnesotan that wants a job can get one,” said Daudt, who is a Republican from Crown.

The unemployment rate is still 5.4 percent for black Minnesotans and 5 percent for Hispanic residents, but those numbers have also dropped over the last few years.

2. Job vacancies are up 16 percent compared to last year

The increasing number of unfilled jobs shows why low unemployment doesn’t mean the current economy is in perfect shape.

When businesses can’t find people to fill the jobs they have open as baby boomers retire, it hampers their ability to grow and succeed. That crunch is being felt especially hard in the Twin Cities, where there are two job vacancies for every unemployed person, according to the report.

The economic forecast report says the industries with the most open jobs are health care, accomodation and food service, retail and manufacturing.

3. Nearly 70 percent of people age 16 and older are employed

Participation in the labor force has been dropping since the early 2000s, but the rate has ticked upwards lately. The budget report says that’s because “strong economic conditions” may be attracting new people into the job market and also persuading some of the state’s aging workers to put off retirement.

Minnesota’s 68 percent rate of working people is the highest of any state and 7.4 points higher than the national rate, according to the report. While this stat shows just how many people have jobs, it also illustrates just how few people there are left for businesses to entice into working compared to other states.

The budget report said it shows there is “little slack in Minnesota’s labor market.”

4. Wages are expected to rise as businesses struggle to find workers

What can employers do when they’re competing with other businesses for precious few available workers? The budget forecast says they can raise wages or invest in technology that boosts production — which can sometimes result in higher wages for those operating the new tech.

As employment growth drops in the next few years, a “moderate acceleration” in salary growth is forecast. The forecasters expect wages to increase at higher rates than the national average during 2019 and 2020, but slow through 2023.

Wages have been inflation-adjusted to 2017 dollars. 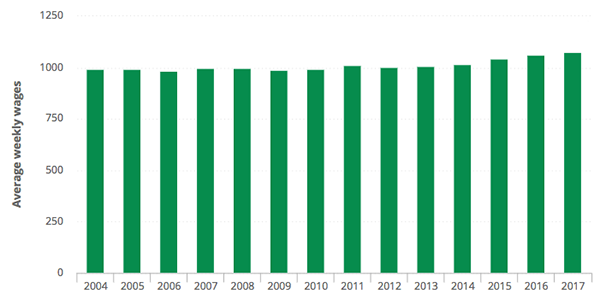 Even with the slow growth in jobs, overall total wages in the state are expected to still outpace inflation, the report says.

5. More people are moving in, than out (for once)

From 2016 to 2017, nearly 8,000 more people moved to Minnesota from inside the U.S. than left the state, reversing a 15-year-long trend of negative domestic migration.

While the report warns one year of growth in this statistic doesn’t signal a long-term growth trend, the number of new Minnesotans is good news in an otherwise bleak landscape of worker shortages.