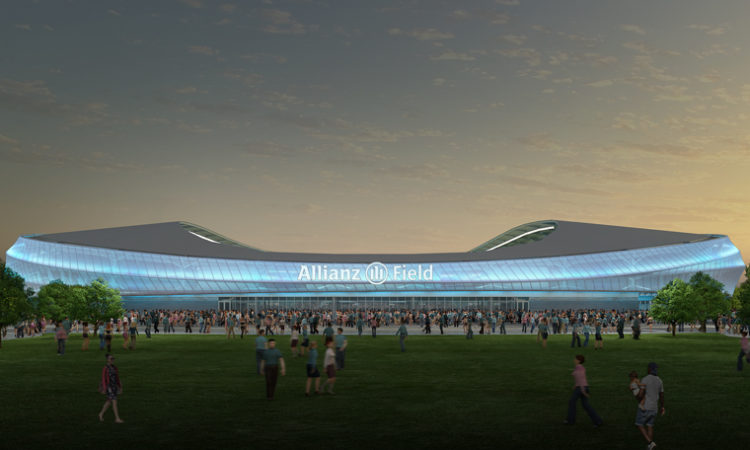 A rendering of Allianz Field. (Courtesy of Minnesota United FC)

Insurance giant Allianz acquired the naming rights of the new stadium, which will be called Allianz Field.
By Sam Schaust
July 25, 2017

Allianz Life Insurance Company of North America, the Golden Valley-based American headquarters of German insurance company Allianz, announced the agreement in a joint release with the Minnesota team on Tuesday. When the stadium opens in 2019, it will be known as Allianz Field.

Neither party disclosed the price of the deal. Recent naming rights sponsorships in Major League Soccer (MLS) have been worth several millions of dollars. The largest such deal—a $100 million, 15-year contract—was signed last year between the Banc of California and the Los Angeles Football Club, which won’t join MLS until 2018.

TCB reported on the rumors of Allianz securing the naming rights in March. Tuesday’s announcement confirms that and makes Allianz the second major corporation to sponsor Minnesota United—the first of which was Target.

“As a global company with a long tradition of stadium sponsorship and strong connection to soccer around the world, Allianz is proud to join Minnesota United FC in bringing this facility to soccer fans in our great state,” Allianz Life president and CEO Walter White said in a statement.

With its Minnesota United deal, Allianz will have its name attached to seven total stadiums. The company currently holds naming rights at soccer stadiums in Munich; Sydney; London; Nice, France; Sao Paulo and Vienna. Allianz is also a lead partner with two of the world’s most well-known clubs, FC Bayern MÃ¼nchen and FC Barcelona.

“Allianz is a great Minnesota company that also has tremendous connections with soccer throughout the world,” Minnesota United owner Dr. Bill McGuire said in prepared remarks. “We are proud to partner with Allianz, a dynamic local company that contributes so much to Minnesota and beyond.”

Allianz, according to the Star Tribune, employs nearly 1,900 workers in Minnesota. The company’s global revenue topped $142 billion in its last fiscal year.

Minnesota United held its groundbreaking for the stadium—estimated to cost $200 million—last month in the Midway neighborhood of St. Paul. Once completed, Allianz Field is expected to have a total capacity of 19,400 with the potential to increase capacity to about 24,500.

Kansas City-based Populous designed the stadium, which is being built by Minneapolis-based Mortenson Construction, the same construction company that built U.S. Bank Stadium, Target Field and is handling the Target Center renovation.

A unique feature of Minnesota United’s stadium, the club said, is the translucent mesh skin wrapped around it and LED lighting technology that will allow it to change colors for other events.