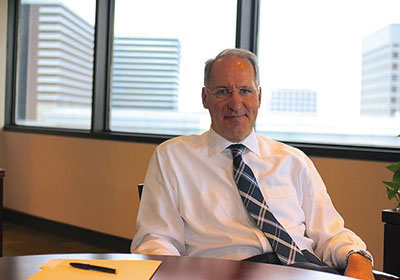 Chamber head Doug Loon has teamed up with labor unions and other business groups to push for a transportation funding compromise at the Capitol.
March 25, 2016

Sitting in his office on the 15th floor of the Securian Building in downtown St. Paul, Doug Loon has a clear view of the Minnesota State Capitol, its 111-year-old dome swaddled in plastic as construction crews finish up restoration work.

Loon is coming up on his nine-month anniversary as head of the Minnesota Chamber of Commerce, the single largest group representing businesses across the state. So far, he’s spent most of his time on the job traveling around Minnesota to meet individual business leaders and members of the group. But in the next two months, his work will be mostly focused just up Cedar Street from his office in St. Paul.

Loon wants to wield the chamber’s powerful lobbying arm at the Capitol to get a long-term transportation funding deal done this year. Democrats in control of the state Senate and Republicans in control of the House hit an impasse last year over whether to raise the state’s gas tax to pay for transportation improvements, a move backed by Democrats, or or to use existing tax revenues on auto parts and repairs and dedicate them to roads and bridges — an option that raises less money than the proposed gas-tax increase. Now, with the 2016 session underway, both parties say they want to get a deal on transportation this year, but there’s still a big divide on how they want to get there.

That’s where Loon sees businesses coming in. He’s teamed up with labor unions and other business groups – like regional chambers of commerce and the Minnesota Business Partnership – to try and find common ground between Democrats and Republicans. The transportation funding bill made it all the way to a conference committee last session, so Loon said the work is already halfway done.

“We are optimistic,” said Loon. “The ball is on the 50-yard line, there’s a clear path forward. There’s a few unknown factors that are, yes, significant, but I don't think they are insurmountable.”

Business wants transit, but no gas tax
Business teaming up with labor is a recipe that’s worked before. In 2008, a similar coalition pushed for a long-term transportation funding deal and helped the Legislature override a veto from Republican Gov. Tim Pawlenty to raise the state’s gas by a nickel. To pay for transit projects, legislators also voted to increase license tab fees and raised sales taxes in the metro-area by a quarter cent.

“When the labor groups and the chamber get together, it’s usually when stuff gets done,” said Harry Melander, president of the Minnesota Building and Construction Trades Council. “If it doesn’t, then I think we have a much bigger problem with the people up at the Capitol.”

But this isn’t 2008. For one, business groups aren’t pushing for an increase in the gas tax this time around. They mostly support the Republican plan to use existing driver-related sales taxes, putting that money toward roads and bridges. But they also want transit to be part of the equation, which is being pushed by Democrats.

“Historically, transit has been part of this discussion,” Loon said. “We believe that will be the case again. We know how important transit can be in the here in the metro, but also in greater Minnesota for rural communities that rely on mobility. We want to make sure transit is part of the discussion, because without it, I fear we won’t be able to move it out of conference committee.”

The transit part of the debate could be where business help is most needed to sway Republican votes.

DFL Gov. Dayton and Democrats in the Senate have pushed for a sales tax increase in the metro to help them pay for transit maintenance and expansion, but they need the backing of the Legislature to do that. What’s more, the controversial Southwest Light Rail Transit line needs $135 million in state funds this year or otherwise risk losing out on $887 million in federal funds for the project.

“If you think of our membership, they are global and they go all over to cities and they see very effective transit,” said Charlie Weaver, a former chief of staff to Pawlenty who’s now head of the Minnesota Business Partnership. “They come back here and they want to grow these companies. But with these demographics and millennials’ approach to jobs, they don’t have cars, they don’t want cars. We need to figure out how to get them to and from these jobs. This is an important aspect when you think about the two biggest things that businesses care about when deciding to come to a state: talent and infrastructure.”

But Republicans in the House have been openly hostile toward the idea of expanding transit, campaigning in 2014 against a DFL majority they said only focused on transit at the expense of outstate roads and bridges. The chamber and the Minnesota Business Partnership are influential with Republicans, who they’ve helped elect to seats in the state House and Senate.

“We wanted to be crystal clear that this is a priority for us,” Weaver said of an overall transportation deal. “This isn’t an afterthought. This isn’t, ‘Gee, if you get around to it.’”

But picture, few details
Sen. Scott Dibble, chair of the Senate Transportation Committee, has been openly frustrated with the lack of urgency on transportation from the business community in the past. Last session, smaller regional chambers of commerce supported new transportation funding, but the state chamber was reluctant to join MoveMN, a now-defunct coalition of groups pushing for a deal on long-term plan. This time around, the business community has been engaged in a “more positive fashion” in the lead up to session, but Dibble wants them to get more specific about what they want out of a deal.

“We want there to be a deal, but we want there to be a real deal,” said Dibble, a Democrat from Minneapolis. “They are reluctant to come out with anything specific. The business community of course is very directly self-interested in making sure there’s transit. That’s how we are going to create greater economic opportunity. That’s how they are able to bring in a diverse workforce.”

Weaver, who has been involved in politics for a long time, said right now Republicans and Democrats are holding to their ideal plans as leverage to get the most out of a final deal. “It feels like those who are argue for a gas tax know that’s not real. [Senate Majority Leader] Tom Bakk knows that; he’s a brilliant negotiator,” Weaver said. “They are teeing that up for leverage.”

Loon is new to the Minnesota Chamber of Commerce, but not to politics. Before joining the state chamber, he was a longtime Midwest regional­ executive for the U.S. Chamber of Commerce. And his wife, Jenifer, is a four-term Republican representative from Eden Prairie (“Our paths will cross occasionally, I expect,” he said of the 2016 session).

Loon knows legislators will ask business leaders to be more prescriptive about what they want in a final transportation deal. For now, though, Loon said he wants to try and figure out what’s possible to get done in this session, which will serve as a precursor to a major election this fall, with all 201 legislative seats on the ballot. “They will be looking toward the business community for input,” Loon said. “But we are not that that point yet.”