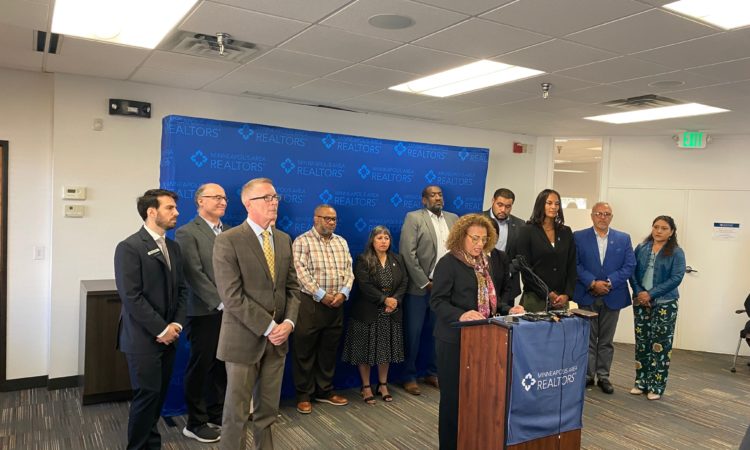 “We were on the wrong side of history,” said MAR president Denise Mazone (at podium) Winter Keefer

The Minneapolis Area Realtors on Wednesday apologized for racial discrimination in the real estate business and announced plans to help close the homeownership gap between Black and white residents.
By Winter Keefer
October 12, 2022

In Minnesota, three in four white residents are homeowners, but only one in four Black Minnesotans own their home, according to the Minneapolis Area Realtors.

Black Minnesotans’ homeownership rate is more than 50 percent lower than white households, and the gap has been growing since the 1950s, with experts saying the state has one of the largest racial disparities in homeownership in the country.

On Wednesday, the Minneapolis Area Realtors (MAR) publicly apologized for its part in widening this gap. MAR also pledge to implement specific actions to dismantle harmful systems the organization said it helped build.

“We were on the wrong side of history,” said MAR president Denise Mazone, reading from a formal letter of apology at a Wednesday news conference in the organization’s Edina headquarters. The letter continued: “Shame and sincerity alone don’t create meaningful change. We’re committed to making strides at the local, state, and national level around policies and practices.”

“This is the time. It’s long overdue,” she said. “I’m grateful to bring these issues forward and talk about it, especially having some sort of policy behind it because it is time. I work with a lot of first-time homebuyers and the best thing in the world is to see a first-time homebuyer close on a property. I have a closing tomorrow and they’ve already called me three times today they’re so happy.”

MAR’s board of directors approved the following policy changes in an effort to “reduce racial disparities in homeownership”:

Minnesota was one of the first states to use racial covenants on homes, said Jackie Berry, MAR board director. These covenants made it illegal for Black people to live in white neighborhoods and, while they are not enforceable or legal today, they still have lasting effects, she said.

Homes in covenant areas are still valued higher than homes in non-coveted areas, Berry said. The creation of segregated neighborhoods due to those covenants has led to educational, environmental, and health disparities.

As a real estate agent, Berry said she’s had to prepare homeowners of color to take down family pictures and make changes in their homes in order to have a fair appraisal.

“Can you imagine having to do that to your own home? To have to go through and make changes just to make sure you have the same chance at value that others have had.”

She noted that she’s been denied access to showings when buyers of color arrived. While it hasn’t happened often, Berry made it clear this kind of discriminatory practice still exists.