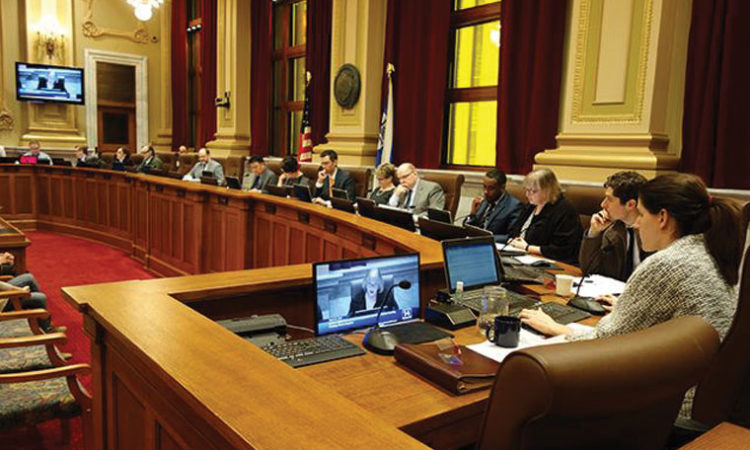 The final vote won’t come until Friday. But the ordinance received enough votes during a joint committee meeting Wednesday to assure passage.
March 23, 2017

The final vote won’t come until Friday. But a Minneapolis ordinance to ban discrimination against renters with Section 8 housing vouchers received enough votes during a joint committee meeting Wednesday to assure passage.

The ordinance would add language to the city’s current civil rights code to make it illegal to refuse to rent houses or apartments to tenants solely because they hold the government vouchers. After a lengthy hearing that was split between landlords opposed to the ordinance versus tenant and tenant advocates in support, the ordinance passed unanimously from both committees.

Taking into account the two council members who serve on both the Community Development Committee and the Public Safety and Civil Rights Committee, there were eight yes votes. Seven are needed to pass ordinances. If approved at the regular council meeting, the ordinance would take effect May 1, 2018.

Began effort two years ago
Council Vice President Elizabeth Glidden, who is leaving the council this year after 12 years, said she began working on the issue two years ago after hearing about voucher holders unable to find landlords who would rent to them. Many apartments are advertised with language that said Section 8 vouchers won’t be accepted.

Both that prohibition and the relative affordability of housing in certain neighborhoods has created a concentration of voucher holders in near north, north Minneapolis and the areas just south of downtown. One of the goals of the program is to help tenants find housing in so-called areas of opportunity with less crime, better schools and better job options.

“At the end of the day, prohibiting discrimination is about giving all a fair shot, a fair opportunity to be considered for housing in different areas of the city that, frankly, today — that door is completely shut,” Glidden said.

Council Member Lisa Goodman said she was late to support the ordinance first sponsored by Glidden and Abdi Warsame because she too was concerned about the way the program was run. She was on the committee that found new Minneapolis Public Housing Authority Executive Director Greg Russ and said she sees the ordinance as a continuation of work to help low-income people find good housing.

The council also began work on a program to reimburse landlords for damages or lost rent from Section 8 renters.

Landlords express frustration with bureaucracy
Landlords and building managers told the council it isn’t an unwillingness to rent to voucher holders that prevents many from not taking part. Instead it is frustration with the housing authority that they accused of being overly bureaucratic and indifferent to concerns raised by landlords.

“I strongly oppose the characterization of owners and managers who do not participate in Section 8 as somehow unethical and discriminatory,” said Bernadette Hornig, whose family company has 2,000 rental units in the city. And she questioned the timing of passing an ordinance now, while also acknowledging problems with the program.

“It is irresponsible to pass this ordinance and say we’ll deal with the practical implications later,” Hornig said. Waiting until the program is reformed would be a better choice, she said.

Several voucher holders, however, spoke of being forced to rent substandard housing with mold and insect problems because that was all they could find that would accept vouchers. Others spoke of not being able to find housing within the timelines and rental limits set by the housing authority.

Confidence in new leadership
Both supporters and opponents of the ordinance seemed to find agreement on one point, that Russ has the potential to improve the performance of the agency, especially its management of what is called the Housing Choice Voucher program. In remarks before the two committees, Russ said he wants to work with landlords and tenants to improve the program.

“We’re managing a large program,” Russ said. “I am not going to represent to anyone that it is perfect.”

Landlords, however, suggested he be given time to respond to recommendations of a recent study of the agency before they are all but required to take part in what has been a voluntary Section 8 program. And Marty McDonough, director of municipal affairs for the Minnesota Multi Housing Association, said the ordinance was first introduced in June of 2015 but did not formally resurface before the council until last month.

“This is the first public hearing on this very important public issue and it appears likely it will be before the full council on Friday,” McDonough said. “So 21 months, it gets no activity and then gets two votes in three days. We think that’s wrong.”

The ordinance would be enforced by the city’s civil rights division. Under the rules, landlords couldn’t have blanket bans but could still screen prospective tenants for issues such as payment history and past problems with other rentals. Complaints would likely first lead to conciliation meetings but the city could assess landlords for damages caused by tenants being illegally rejected.

The MPHA distributes 5,076 federally subsidized vouchers serving about 17,000 residents (the waiting list to get a voucher currently has 1,700 families on it). But 53 percent of those residents are children, and voucher holders make up only 6 percent of the Minneapolis rental market. In fact, the housing authority estimates that only about 200 voucher holders are searching for rental housing at any given time in the city.

According to a fact sheet produced by Minneapolis city staff, “there are 58 jurisdictions nationwide that specifically prohibit source of income discrimination (inclusive of Section 8), or specifically reference Section 8, including nine states and 49 counties or cities. There are three more states currently seeking to enact statewide prohibitions; those include: Hawaii, Maryland, and New York.”