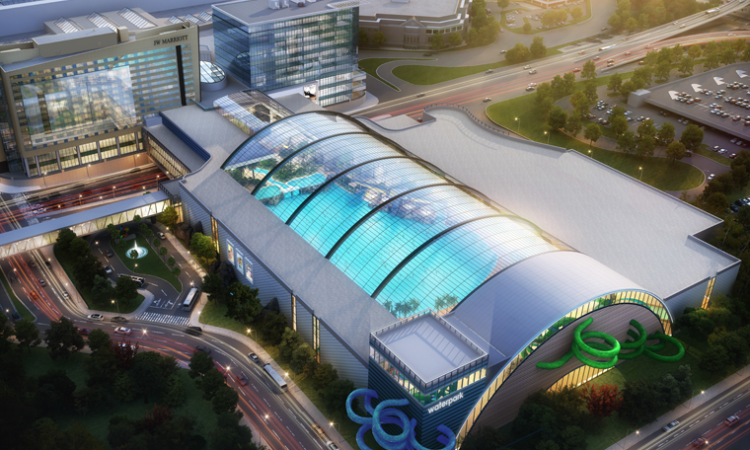 A rendering of the planned waterpark attached to the Mall of America. (Rendering from DLR Group/Bloomington Port Authority)

Mall of America owner Triple Five and the city of Bloomington are weighing a deal for the massive complex.
By Burl Gilyard
October 30, 2018

The owners of the Mall of America are looking to add a large waterpark attached to the complex, but they can’t move ahead without some help from the city of Bloomington. The latest plans outline a 250,000-square-foot waterpark that would cost an estimated $230 million to $250 million. But at the conceptual stage of the project, the total budget remains a moving target.

“Frankly the budget’s going to move around until we settle on a size,” said Schane Rudlang, administrator for the Bloomington Port Authority, the city’s economic development agency.

“We’ll continue to refine that cost over the next six to 12 months.”

Edmonton-based Triple Five developed and owns the MOA. But an overview of the waterpark project on the city’s website clearly states: “Private financing interest rates are high enough to make the project unfeasible.”

In other words, Triple Five would not develop the project on its own.

The proposed plan now calls for Triple Five and the city to co-develop the project. The deal framework outlines a strategy for a nonprofit entity to obtain the construction financing and initially own the waterpark. The nonprofit structure would allow developers to get a lower interest rate to finance the project. The city would have a 50-year ground lease with Triple Five for the site, wherein the city would become the owner of the waterpark after the project debt is paid off in 30 years.

The potential arrangement is up for discussion on Thursday before a joint meeting of the Bloomington City Council and the Port Authority board. Rudlang says that the meeting is a chance “to have them give us the thumbs up or thumbs down on this [deal] structure.”

The Port Authority would spend an estimated $45 million to $55 million in tax increment financing to pay for a parking ramp and other infrastructure costs including site work and utilities associated with the waterpark.

Material prepared for the Thursday meeting notes potential project risks: “The biggest risk is probably the waterpark not meeting revenue expectations.” If that happened, the city would tap sales and use tax revenue to cover any shortfalls. 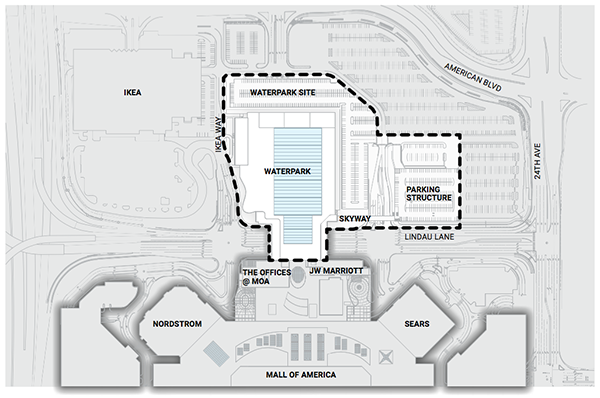 The submitted site plan for the waterpark attached to the Mall of America. (Map submitted by Bloomington Port Authority)

The site is a five-minute drive from the Great Wolf Lodge hotel which also features a waterpark. Rudlang noted that the Great Wolf waterpark is only accessible to guests of the hotel.

Jasper said that the addition of the waterpark helps the MOA remain at “top of mind and a desired destination for regional, national and international visitors” and keeps it fresh.

“For more than 25 years the Mall’s long-term vision has always included growth and a big part of that vision was to build a world-class waterpark,” said Jasper. “Our region lacks a waterpark attraction of this scope and scale.”

Rudlang and Bloomington’s city manager traveled to Edmonton in August for a look at Triple Five’s West Edmonton Mall, which also features a waterpark.

“I think the water park adds a really key component to that mall. It was built in the ‘80s…they’ve done a great job of keeping it updated,” said Rudlang. “Having retail mixed with entertainment is the future.”

Even if the MOA waterpark project moves forward, it’s going to take some time. Construction could start in late 2019 and be complete in the last half of 2021.

The Mall of America has added several new elements in recent years. The Radisson Blu hotel at MOA opened in 2013; a JW Marriott hotel opened there in 2015. Triple Five also added an office building with approximately 200,000 square feet of space in 2015. The waterpark is slated to be on the north side of the mall, just east of the Ikea store and close to JW Marriott and the MOA office building.

Will MOA look to add more non-retail attractions in the future?

“We continue to evaluate consumer trends and market demands for retail, attractions, experiences and dining,” said Jasper. “Over the years we have continued to expand our offerings and experiences at Mall of America and we eagerly look for new additions in the future.”